MEP Father Jean Thinh was beheaded while preparing to celebrate Mass in the early morning of May 18, 1948 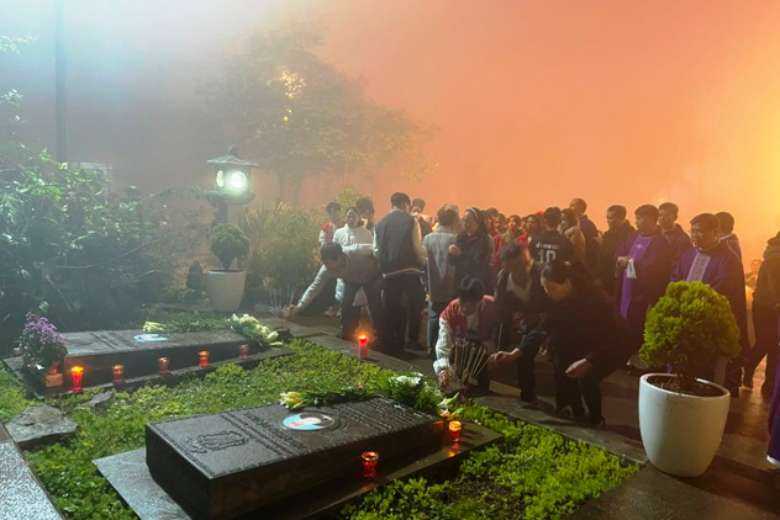 Priests and Catholics offer incense and flowers on the graves of Father Jean Pierre Idiart Alhor Thinh and Bishop Paul Ramond in cold weather at Sapa church on May 18. (Photo supplied)

Vietnam Catholics in a century-old parish that is home to ethnic Hmong villagers commemorated a French missionary who sacrificed his life for them.

Father Peter Pham Thanh Binh, parish priest of Sapa, and six other priests concelebrated a special Mass on May 18 to mark the 74th anniversary of Father Jean Pierre Idiart Alhor Thinh, a member of the Paris Foreign Missions Society (MEP).

Many people including ethnic Hmong people also joined the ceremony at Our Lady of the Rosary Church in Sapa town in Lao Cai province.

“It was in this stone church that our beloved Father Jean Thinh was beheaded while he was kneeling to pray and prepare to celebrate a Mass in the early morning of May 18, 1948. Until now, the identities of those who killed him have not been found,” Father Thanh said.

The 51-year-old priest said the late missionary had devoted himself to serving local people and evangelizing ethnic minority groups in the remote northwestern provinces.

Father Jean Thinh, who started to serve the parish in 1937, was fluent in the Hmong language and worked closely with Hmong people.

In 1945, he left Sapa for Hanoi to avoid fierce fighting between communist forces and French troops, but he managed to return to the parish in late 1947 to provide spiritual support for local people who were left bewildered and depressed.

After his death, many local people moved to other places, leaving the church and parish house that later were used as a school and store. Local people could not resume religious activities until 1995, when priests from other places were allowed to pay regular visits to them.

Father Binh said the celebration was an opportunity for local people to express their deep gratitude to foreign missionaries and remind one another to develop the parish as they did.

Sapa Parish was established in 1902 by MEP members. The priest, who was assigned to the parish in 2007, said: “We have been attempting to preserve the rich heritage of faith built in the early 20th century.”

They have restored the church that was badly damaged by wars, taken back church properties invaded by people, and built new facilities to meet religious needs of the local church. They also build chapels, restore old churches and set up mission stations in Sapa district that is now home to over 30 subparishes and mission stations.

The priest said the number of Catholics had increased from 1,000 in 2007 to 4,200, most of them  Hmong. “What we have today is thanks to the heroic sacrifices made by foreign missionaries,” he said.

Born in 1904 in France, Jean Thinh joined MEP in 1926 and was ordained a priest six years later. He landed in Hung Hoa Diocese in 1933 and worked at the Bishop’s House until he was assigned to Sapa church.

His grave is next to that of French Bishop Paul Ramond Loc, the first prelate of Hung Hoa, nearby the church.