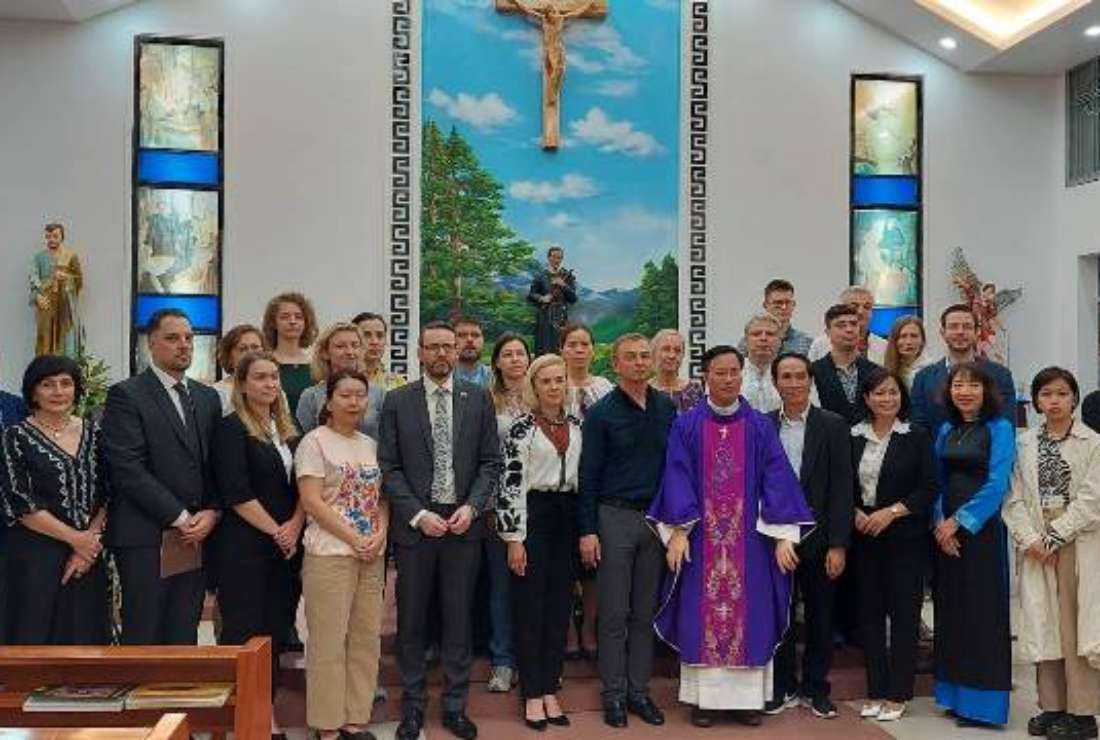 Father Vincent Tran Tri Tue poses with Ukrainian and other foreign diplomats for a group photo after the Mass marking the 90th anniversary of the Holodomor famine victims at St Gerard Chapel in Hanoi. (Photo: Embassy Of Ukraine In Vietnam)

Catholics from a parish in Vietnam’s capital joined Ukrainians in remembering millions of victims who died in famines caused by the former Soviet leaders.

Ukrainian and foreign diplomats attended a special Mass to mark the 90th anniversary of the 1932-33 Holodomor famine victims at St Gerard Chapel of the Redemptorist-run Thai Ha Parish in Hanoi on Nov. 26.

Redemptorist Father Vincent Tran Tri Tue, who presided at the memorial service, said the event was held at the request of the Embassy of Ukraine in Hanoi.

Father Tue said local Catholics expressed solidarity and sympathy for Ukraine's excruciating agony and losses in the past and what its people are suffering in the present due to the ongoing Russian invasion of their country.

The priest called on participants to live the Advent mood of staying awake and praying for the bloody war to come to an end.

"We should place absolute trust in God to easily forgive other people and work with all people to bring peace, truth, justice and salvation to the world," he said.

Ukrainian Ambassador Oleksandr Gaman said: "This year, the victims of the Stalinist genocide are honored against the backdrop of a full-scale war between Russia and Ukraine. Nine decades after the Holodomor genocide, identical practices are again being used against Ukrainians.”

Ambassador Gaman said in the current war, Russia is pursuing the same goal – the extermination of Ukrainian identity and the Ukrainian nation.

He said Russia is trying to break the will of Ukrainian resistance by throwing its entire terrorist arsenal against us. Former Soviet leader Joseph Stalin as well as Russian President Vladimir Putin made a choice in favor of genocide because other methods of subjugating Ukrainian people did not work.

“Our present teaches us that to serve as a safeguard against the repetition of the tragedies and crimes of the past, our memory must be alive and fair," he said at the end of the ceremony.

He said those who commit crimes against humanity must be condemned by the international community and the victims should be honored.

He said that on that day at 4 pm Kyiv time, all Ukrainians observed nationwide silence and lighted memorial candles to warm the souls of the innocent victims of Holodomor and let their memory live forever.

This is the second time Thai Ha Parish has held a service to pray for Ukrainian people under his proposal since the Russian invasion of his country.

The Holodomor, a term derived from the Ukrainian words for hunger (holod) and extermination (mor), was a man-made famine that convulsed the Soviet republic of Ukraine from 1932 to 1933. It was part of a broader Soviet famine (1931–34) that also caused mass starvation in the grain-growing regions of Soviet Russia and Kazakhstan.

The Ukrainian famine was made deadlier by a series of political decrees and decisions that were aimed mostly at Ukraine by Stalin to collectivize agriculture in 1929. Teams of Communist Party agitators forced peasants to relinquish their land, personal property, and housing to collective farms, and they deported so-called kulaks - wealthier peasants – and those who resisted collectivization altogether.

Collectivization led to a drop in production, the disorganization of the rural economy, and food shortages. It also sparked a series of peasant rebellions including armed uprisings.

Monuments commemorating the Holodomor are erected by the Ukrainian government, and Holodomor Remembrance Day is observed on the fourth Saturday of November.

Sixteen countries as well as the Vatican recognize the Holodomor as genocide, and the United States declared that Joseph Stalin and those around him committed genocide against the Ukrainians in 1932-33.