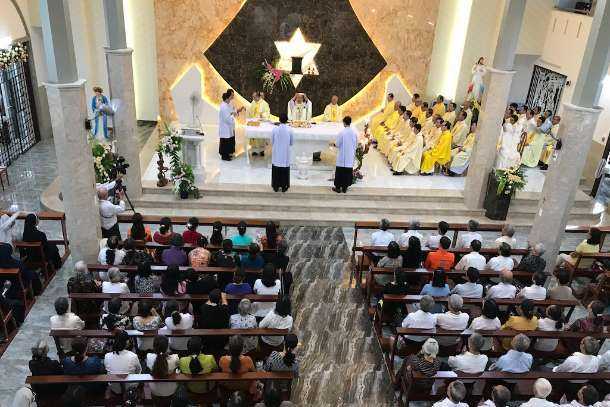 People attend the feast of St. Therese of the Infant Jesus at the Carmelite monastery in Nha Trang on Oct. 1. (Photo: UCA News)

Catholics from a south central diocese in Vietnam have expressed their gratitude to Carmelite nuns who have quietly prayed for their needs for the past six decades.

On Oct. 1, Bishop Joseph Vo Duc Minh of Nha Trang presided at the feast of St. Therese of the Child Jesus, closing the jubilee year of the 60th anniversary of Nha Trang Carmel Monastery’s establishment in the coastal city of Nha Trang.

Bishop Minh praised local Carmelite nuns for quietly serving the Church as “lightning rods” receiving all rage, distress, sufferings, disaster, consternation and misfortune from all kinds of people and praying to God to offer them peace, communion and bliss.

The 76-year-old prelate said local Carmelites who win their families’ approval give up all their relatives, positions, belongings, power, private freedom, ambitions and other things to spend their life in the monastery praying, fasting and doing penance so that they can become little and humble women before God and other people.

He said the Carmelites take God’s yoke in their life and bear witness to the Good News: “First set your hearts on the kingdom of God, and all things will be given to you.”

Bishop Minh said all clergy, religious, laypeople and those who have not known God admire and show their deep gratitude to the Carmelite nuns who quietly pray for them to be peaceful and blissful.

He said local Catholics are grateful to the Carmelite monastery for sending members to found new monasteries in the dioceses of Ban Me Thuot and Phu Cuong and to join other monasteries in France and the United States.

He called on Carmelites to pray for the Church to be in peace, the nation to enjoy unity and prosperity, and the world to escape from the lethal Covid-19 pandemic soon. Catholics offer flowers and pray in front of a statue of St. Therese of the Infant Jesus at the Carmelite monastery in Nha Trang on Oct. 1. (Photo: UCA News)

Bishop Minh also asked people to love, honor, regularly visit and together with local Carmelites pray for their families, communities and parishes since “the monastery pours roses, love, holiness and peace to all people.”

During the Mass where a young nun took vows, participants were given roses blessed by Bishop Minh as gifts from St. Therese, who said when she returned to Heaven she would pour roses onto the world.

Mother Marie Rose Eucharist Nguyen Thi Thu Hien said the monastery takes an important role in church life since many people visit and ask the nuns to pray for their needs and young vocations join the monastery.

A group of French and Vietnamese Carmelites from France landed in Nha Trang in 1960 at the invitation of the late French Bishop Marcel Piquet Loi. Those nuns had fled from their monastery in Thanh Hoa, northern Vietnam, in 1955 to avoid war.

After the country was reunified under communist rule in 1975, all French nuns excluding Mother Marguerite Marie du Sacré Coeur were forced to leave the monastery.

Four French Carmelites arrived in Saigon (now Ho Chi Minh City) in 1861 and founded the first monastery in Vietnam. Later they established tens of monasteries in other places in Vietnam and other Asian countries.

Vietnam has eight monasteries with 260 Carmelites. The Carmelite monastery in Nha Trang now has 37 members.