Catholic leaders offered flowers, fruits, and a Vatican message for Buddhists for the festival 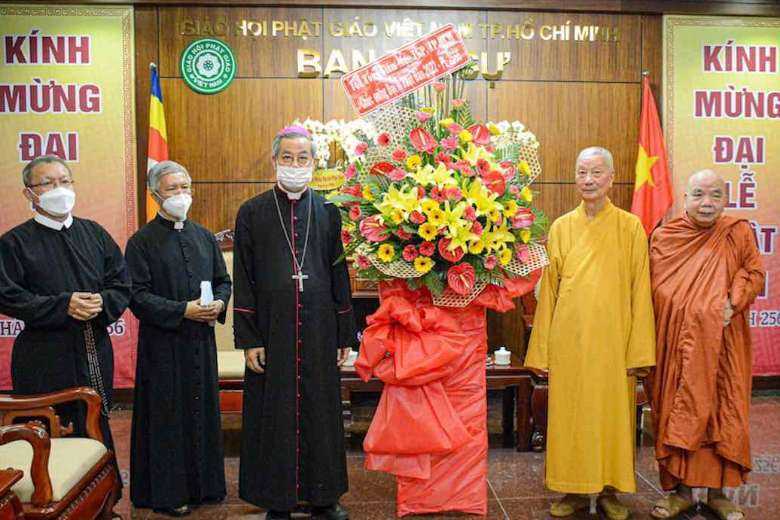 Catholic leaders in Vietnam have visited Buddhist leaders and pagods during the Vesak festival to promote social harmony and inter-religious dialogue.

Archbishop Joseph Nguyen Nang of Ho Chi Minh City, accompanied by members of the archdiocesan Interfaith Dialogue Committee, visited the Vietnam National Pagoda, headquarters of the Buddhist Sangha executive committee based in the city on May 13 as part of the celebrations. Vesak Day, which commemorates the birth, enlightenment, and death of the Buddha, this year fell on May 16. The most important festival of Theravada Buddhism is observed on the full moon of the lunar month Visakha, which annually comes in April or May.At the national pagoda, the Catholic delegates were welcomed by Most Venerable Thich Tri Quang, head of the executive committee, and seven other pagoda officials.Archbishop Nang offered blessings to those at the gathering and to all Buddhist followers across the world.The prelate said he was pleased to see local pagodas and streets decorated with flags, banners and flowers to observe the United Nations recognized festival. The feast is being celebrated with gaiety this year after a gap of two years due to the Covid-19 pandemic.During the pandemic, cooperation between local Catholics and Buddhists helped provide generous support for people in need and Covid-19 victims, said the archbishop, deputy head of the Catholic Bishops’ Conference of Vietnam.“We pray for harmony, solidarity and spiritual values to make a big contribution to peace, joy and happiness of the nation,” he said.Most Venerable Thich Tri Quang said he admired young Catholic religious who joined frontline health workers to help care for Covid-19 patients at field hospitals last year.“We hope young monks and nuns from the two religions have more opportunities to work together to bring peace and happiness to people,” the 84-year-old Buddhist leader said.He also appreciated local Catholics’ positive attitude toward Buddhists.The Buddhist leader, who also serves as Acting Dharma Master of the Vietnam Buddhist Sangha, also shared memories of meetings with local Church leaders and having dialogues.He said he was “immensely impressed” with “the spirit of peace, justice and truth promoted” by the late Archbishop Paul Nguyen Van Binh, who served the 178-year-old archdiocese as the first Vietnamese prelate from 1960 to 1995.Bishop Peter Nguyen Van Kham of My Tho and two priests visited venerable monks from Vinh Trang Pagoda in My Tho on  May 14.

Bishop Kham offered the monks fruits, flowers and the Vietnamese translation of the Message of the Pontifical Council for Interreligious Dialogue to Buddhists.

In return, Venerable Thich Quang Loc, deputy of the executive council of local Buddhists, gave face masks with the logo of the Vietnam Buddhist Sangha.

He said he was pleased with the solidarity promoted by followers of other religions in recent years.

The Buddhist and Catholic leaders also talked about losses caused by the prolonged pandemic.

Catholic delegations from dioceses of Bac Ninh and Phan Thiet also visited local Buddhist leaders and offered them flowers and a message from the Pontifical Council for Interreligious Dialogue.

Venerable Thich Minh Nhat from Phat Hoc Pagoda in Phan Thiet told Bishop Joseph Do Manh Hung of Phan Thiet that he appreciated the Vatican’s message and hoped that the visit would foster a sense of solidarity among local Catholics and Buddhists.