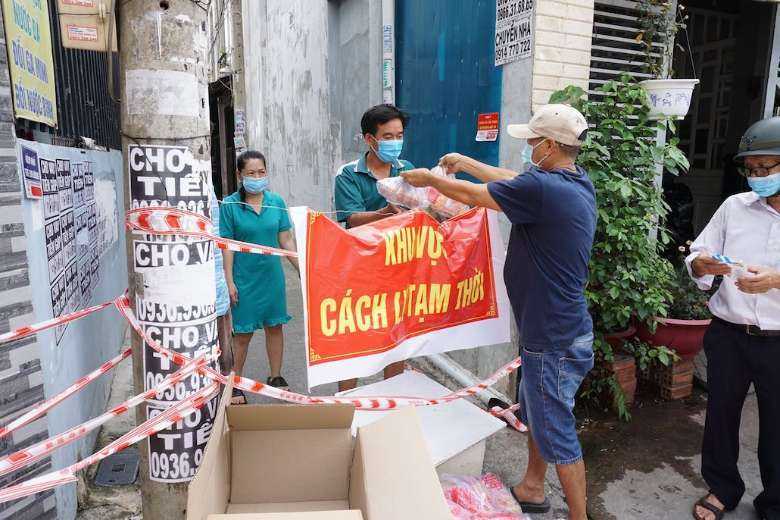 Bishops in Vietnam have made donations to a state-run Covid-19 vaccine fund to accelerate the vaccine procurement drive and tackle a more stubborn wave of infections.

The donation was from Caritas Vietnam and the bishops and had been approved by the bishops’ standing committee.

Archbishop Joseph Nguyen Chi Linh, head of the bishops, had earlier commended the government-run fund, which he said was reasonable, opportune and deserving of public support. He called on Catholics to make donations and cooperate with all people in fighting the pandemic.

Prime Minister Chinh, who received the money from Archbishop Thien, said the vaccine fund aims to mobilize social resources for the purchase and import of vaccines as well as for research, development and production of domestic vaccines.

He said the government strives for the goal of freely inoculating all people to achieve herd immunity as strategic and decisive solution to contain the pandemic.

The fund, which needs to secure 25.2 trillion dong ($1.2 billion) to acquire 150 million vaccine doses for 75 million people out of the total population of 98 million, had received 1,036 billion dong ($45 million) from domestic businesses and benefactors as of June 5, according to government statistics.

Bishop Peter Nguyen Van Kham of My Tho, secretary-general of the Vietnam bishops, said the production of vaccines and vaccination are considered a long-term solution to get rid of the coronavirus.

Noting that it is important that all people including the poorest in society must be vaccinated, Bishop Kham called on Catholics, for the common good and love for all people, to make as many contributions as they can to the fund.

The prelate said Catholics should respect the common good by obeying Covid-19 protocols imposed by health authorities. They ought to accept the temporary suspension of religious services at churches to avoid domestic infections as their civic and Christian duties.

On June 5, Father Anthony Phan Van Tu, representative of the apostolic administrator of the northern diocese of Phat Diem, called on Catholics to offer voluntary contributions to the government’s vaccine fund so that all people could be inoculated.

Father Tu also asked local parishes to suspend all religious services and activities with public attendance starting June 7 until further notice to contain the coronavirus outbreak. Catholics ought to attend online Masses, recite rosaries and Divine Mercy, and pray in front of the Eucharist individually at churches.

Vietnam has recorded 8,747 coronavirus cases including 53 deaths. More than half of the cases have been detected in 39 of the country’s 63 cities and provinces since late April.

The Southeast Asian country has accepted delivery of almost 2.9 million doses of vaccine so far, mostly AstraZeneca shots, and nearly one million have been administered.