They appeal for people to offer assistance to disaster victims 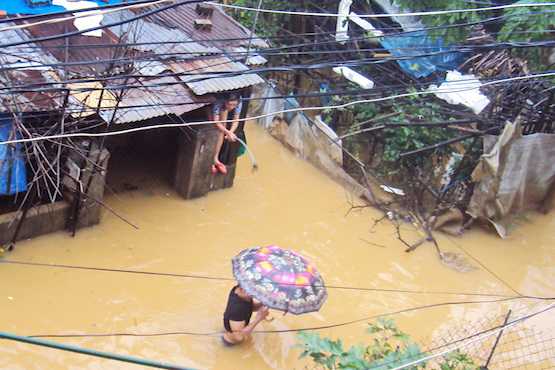 The Catholic bishops in Vietnam have called on people to help those affected by the recent cyclones and floods in the country's northern and central provinces.

The region was been affected by two typhoons, landslides and floods caused by heavy rain since August.

"Local people who have lived in poverty have now become homeless and lost all belongings," Archbishop Joseph Nguyen Chi Linh of Hue, president of the Catholic bishops' conference said in a Nov. 9 public letter. He called on people to help those affected return to a normal life.

Typhoon Damrey which made landfall in the coastal provinces on Nov. 4 alone claimed 106 dead and left at least 25 missing. The real number of casualties just keep increasing, the archbishop said. Many houses, crops, fish farms, roads and schools were washed away or destroyed, he added.

The typhoon with winds of 135km an hour is seen as the strongest storm to hit the region in about two decades. More than 380,000 people are in need of immediate humanitarian assistance. The typhoon has destroyed nearly 1,500 houses and around 120,000 houses are partially damaged. The storm submerged 5,296 hectares of paddy and nearly 15,000 hectares of vegetables and fruits, according to the IFRC.

"We collect rainwater from iron-sheet roofs to use," Hoa said adding that the floodwater is polluted by dead poultry and garbage.

"We would like to help those who have suffered the loss of their loved ones and properties and other brothers and sisters in provinces affected by typhoons and floods," Archbishop Linh said.

"May God welcome the dead people and bring comfort to those who are still grieving for their relatives," he said.

"We appeal to all people of God in the country and abroad to cooperate in helping our brothers and sisters overcome their present difficulties and soon return to normal life," Archbishop Linh said.