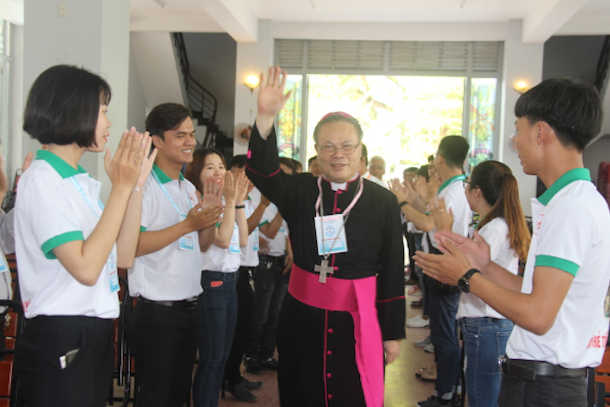 The head of Vietnam’s bishops has praised Australian Cardinal George Pell’s release from jail as an unprecedented event in the Catholic Church.

“Finally, you are freed by the Australian High Court. It is what all God’s people around the world had confidently expected since the very beginning of the case,” Archbishop Joseph Nguyen Chi Linh, president of the Catholic Bishops’ Conference of Vietnam, said in his congratulatory message to Cardinal Pell on April 7.

The 78-year-old cardinal, who had served 400 days of his sentence, was freed from Victoria's Barwon Prison and driven to a Carmelite monastery in Melbourne on April 7 after the High Court quashed his conviction for sexually abusing two choir boys in 1996.

Seven judges overturned the former archbishop of Sydney’s six-year jail sentence and ruled unanimously that the jury had not properly considered all the evidence presented at his trial.

Archbishop Linh said Cardinal Pell’s release is the result of indefatigable praying by the universal Church, Pope Francis, the College of Cardinals, the Episcopate and the clergy, especially the Catholic Church in Australia and Sydney Archdiocese. God really answers his children’s prayers during a time of trial, he added.

“We firmly believe that this is a great moment of your life and an unprecedented event in our Church’s history,” the archbishop of Hue said in his congratulatory message to Cardinal Pell.

“In the Covid-19 pandemic and this Holy Week, it seems that you have already risen and sung Alleluia prior to the Resurrection of our Lord.”

Archbishop Linh also asked Cardinal Pell, who was the Vatican's treasurer from 2014-18, to pray for the local Church, adding that he hoped to welcome him to Vietnam in the future.

In December 2018, Cardinal Pell was found guilty of sexually abusing two 13-year-old choir boys in private rooms of St. Patrick's Cathedral when he was archbishop of Melbourne.

He appealed against the verdict in Victoria's Court of Appeal last year, but three judges upheld the decision by a 2-1 majority.

In his latest appeal, Cardinal Pell argued that the jury relied too heavily on one person's evidence.

"The jury, acting rationally on the whole of the evidence, ought to have entertained a doubt as to the applicant's guilt," said the court in its judgment.

After his release from jail, Cardinal Pell said he held no ill will towards his accuser.

"The point was whether I had committed these awful crimes, and I did not. The only basis for long-term healing is truth and the only basis for justice is truth, because justice means truth for all," he said.

"Special thanks for all the prayers and thousands of letters of support. I want to thank in particular my family for their love and support and what they had to go through; my small team of advisers; those who spoke up for me and suffered as a result; and all my friends and supporters here and overseas.

"Also, my deepest thanks and gratitude to my entire legal team for their unwavering resolve to see justice prevail, to throw light on manufactured obscurity and to reveal the truth.”