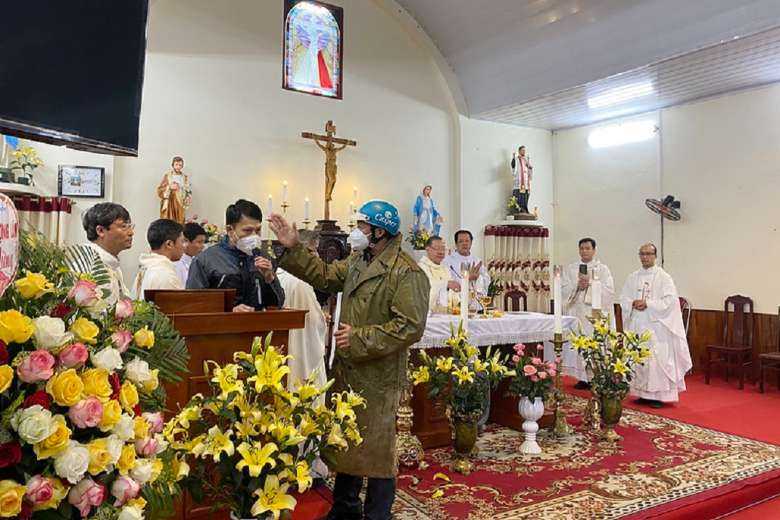 Two officials use the microphone to order people at Vu Ban Church to disperse on Feb. 20. (Photo courtesy of tonggiaophanhanoi.org)

Authorities from a northwestern province in Vietnam have been accused of disrespecting religious services after interrupting a Mass celebrated by Hanoi's archbishop.

Hanoi Archdiocese said in a report that when Mass-goers prepared to receive the Eucharist, two officials suddenly rushed to the sanctuary and demanded those gathered to disperse.

It said the Mass was interrupted for some minutes and resumed after some priests and laypeople struggled to ask the officials to leave the church.

A two-minute video clip posted by one of the Mass-goers showed that the officials — one of them in a face mask, motorcycle helmet and raincoat — shouted loudly and pointed at priests. They took the microphone on the lectern, ordering all people to “break up. If not, we will make reports and take appropriate measures.”

Some priests and lay leaders prevented them from approaching the altar and Archbishop Thien before asking them to leave the sanctuary while other priests were receiving the Eucharist and people said prayers and sang hymns.

Regardless of any reason, they said, this was an illegal act, harassment and an unacceptable insult to religion

Local people identified one of the officials as the party chief of Vu Ban town.

So far the reason behind the incident has not been released. However, many people expressed their strong disapproval of the two officials.

Regardless of any reason, they said, this was an illegal act, harassment and an unacceptable insult to religion. The officials had total disrespect for religious places.

They said the authorities should have waited until the end of the Mass and worked with priests and Catholics as liturgical services are sacred.

The old-established parish had all its facilities confiscated and had almost no religious activities after 1954, when North Vietnam was controlled by communists. In recent years, some priests have gathered and offered pastoral care to local people and built facilities.

The Mass was part of a two-day pastoral visit paid by Archbishop Thien to remote parishes in the mountainous province. During 2022, designated as year of evangelization by the archdiocese, the prelate is scheduled to visit remote parishes and subparishes on the third Sundays of months.

In his homilies, the 61-year-old archbishop called on local people to bravely bear witness to God, who is compassionate and merciful, in their places and treat all people including those who hate them with loving kindness.

He visited two parishes and three subparishes in the province. He also offered copies of catechism and pictures of Mother Mary to local people.