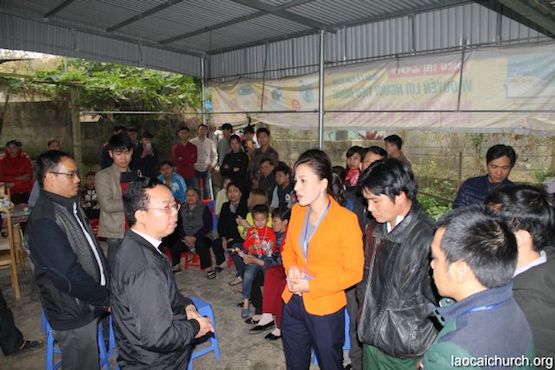 Father Joseph Nguyen Van Thanh (second on the left) has accused local authorities of intentionally harassing Catholics in northwestern Vietnam. In the photo Father Thanh talks with Ha Thi Khanh Nguyet, chairwoman of the Muong Khuong, and other local officials on March 17. (Photo from laocaichurch.org)

Plainclothes "officials" in northwest Vietnam broke into a Catholic family's home and attempted to take into custody a priest preparing to celebrate Easter Mass.

More than 20 men and women, who identified themselves as "local officials," barged into the house where a visiting priest was to celebrate Easter for around 100 Catholics in the town of Muong Khuong, Lao Cai Province. Eyewitnesses said these "local officials" shouted and pushed people as they tried to take Father Peter Nguyen Dinh Thai from Lao Cai Parish to the local Communist Party headquarters.

Many Catholics including women surrounded and protected the priest. They asked the men to show their identification and the summons on the priest but the "officials" refused.

Local authorities said they received no order from the provincial government to allow priests from Lao Cai parish to come to give pastoral work to local Catholics at the house. However, Father Thanh accused them of breaking their promises and intentionally harassing local Catholics.

"We have petitioned levels of the government many times for years and the provincial government has verbally agreed to allow priests to give pastoral services in Muong Khuong and two other communes: Ban Lau and Ban Xen," he said.

Father Thanh said the local government, who considers the area to have no religion, only approved Ban Xen. The three communes have a total of 400 Catholics who gather in private homes to pray.

He said local Catholics have suffered persecution for years and the situation has not improved even though the government pledged to respect religious freedom. "We will petition the province to have a meeting with the church and the local government to deal with the bad situation as soon as possible," he said, adding that the local Hung Hoa Diocese is deeply concerned about the persecution.

On March 17, Auxiliary Bishop Alfonse Nguyen Huu Long of Hung Hoa, accompanied by a group of priests and laypeople, visited Catholics in Muong Khuong. Bishop Long encouraged Catholics there to practice their faith even under difficult circumstances "because God does not abandon you."

While Bishop Long celebrated Mass at the home of a local Catholic family, Ha Thi Khanh Nguyet, chairwoman of the town and many local officials entered the house and asked the delegation to work with them at their headquarters. During the meeting, Bishop Long said the provincial government had approved the mission stations and asked the local government to stop persecuting Catholics. In response, Nguyet promised to respect and desist from discrimination against Catholics, according to a Lao Cai Parish report.