Redemptorist priest calls on the government to release 'these innocent people' Police in Vietnam have arrested six activists for spreading anti-state materials in a severe crackdown on dissidents ahead of the Communist Party congress.

The ministry said police in the northern province of Hoa Binh detained Can Thi Theu, 58, and Trinh Ba Tu, 31. Theu is the mother of Phuong and Tu.

The ministry accused the arrested of “composing and posting writings and clips with fabrication and causing confusion to the people so as to oppose the state.”

Do Thi Thu, Phuong’s wife, said many police cut off electricity, broke their house’s door and arrested Phuong in an early-morning raid.

She said her husband had livestreamed before his arrest to say that he was ready to be detained. He recently had spoken the truth about a brutal police attack on farmers in Dong Tam commune early this year. He reported the attack to the public and was accused of affecting the political system.

Phuong, who reported the Dong Tam case to US diplomats, said he wished local people and foreign diplomats would pay attention to 29 detained farmers from Dong Tam who face heavy sentences.

He said he was healthy and had no plan for suicide, so if he died or his body was injured, police would take responsibility.

Activists said police arrested the four activists to silence those who support the Dong Tam victims before they will be tried in the coming months. 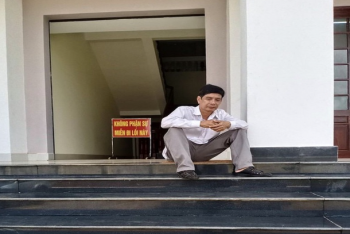 Theu, who led other farmers to oppose officials confiscating their land, was sentenced to 15 months in jail for causing public disorder in 2014. Two years later, she was given a 20-month sentence for joining peaceful protests.

Her family members have been constantly harassed by police for their rights and democratic activities. Her two sons spoke out against social injustice.

Tam is well known for her video clips on hot disputes between people and authorities and demonstrations staged by farmers.

Redemptorist Father John Nguyen Ngoc Nam Phong said Theu’s relatives, who are not Catholic, joined Catholics’ prayers many times at Thai Ha church in Hanoi for the nation to be happy and peaceful, and for those who are evicted from their properties unfairly.

“She and her sons walk with Jesus on a road of misery but also the road to glory and salvation,” the priest said. “We call on the government to release these innocent people.”

He urged all people to pray for the detainees to be faithful to their commitment and peaceful.

On June 25, state media reported that police had also arrested Vu Tien Chi, 54, from Bao Loc city, and Nguyen Thi Cam Thuy, 44, in Khanh Hoa province. Chi and Thuy are accused of “making, storing, spreading information and materials for opposing the State of Socialist Republic of Vietnam” under Article 117 of the country’s Criminal Code.

Activists said the government will continue its crackdown on voices of dissent as way to prepare for the party congress early next year.