More than 3,000 Catholics in Hue attend a special Mass to mark 170 years since a diocese was established there 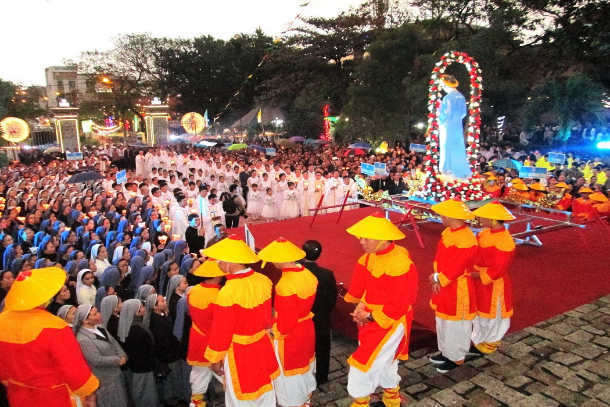 Catholics honor a statue of Our Lady of La Vang in front of Phu Cam Cathedral in Hue, Vietnam, on Jan. 1. (ucanews photo)

Hue Archdiocese in central Vietnam has kicked off a year of celebrations marking 170 years as a Catholic Church jurisdiction by honoring Mother Mary and thousands of people martyred in anti-Catholic purges.

An estimated 3,000 people attended the opening Mass on Jan. 1 to start the special year at Phu Cam Cathedral in Hue, the capital of Thua Thien Hue province.

Before the Mass, Archbishop Joseph Nguyen Chi Linh of Hue and Archbishop Marek Zalewski, the Vatican’s non-resident envoy to Vietnam, offered incense in front of a large statue of Our Mother of La Vang at the nearby Pastoral Center.

Archbishop Linh, head of the Vietnamese bishops’ conference, said the special year with the theme "God is joy of youth" is “aimed at thanking God for loving us and giving us an opportunity to express our deep gratitude to our ancestors who protected and passed down the faith to us today.”

He said local Catholics would honor Mother Mary and appeal to her to continue supporting them as she protected their ancestors in La Vang from religious persecution in 1798.

That year, many Catholics were forced to hide in jungles in poor conditions to avoid persecution by local authorities.

Mother Mary with the infant Jesus in her arms is believed to have appeared many times and encouraged them to pick leaves to cure diseases picked up in the jungle.

Many survived and were later able to return home. The events are now marked by the National Shrine of Our Lady of La Vang in the neighboring province of Quang Tri.

Archbishop Linh said many more people suffered as a result of persecution from 1798 to 1883 under four kings — Canh Thinh, Minh Mang, Thieu Tri and Tu Duc. Thousands are believed to have been killed for their faith.

The prelate said the archdiocese decided to choose Our Lady of La Vang as its patroness. The feast of the patroness is observed on Aug. 27, the anniversary of the establishment of the original diocese in 1850.

As part of the Jan. 1 event, a Marian statue was carried by 20 people in imperial costumes in a procession along Hue’s streets to the cathedral.

Catholics today should work together to bear witness to the Good News and bring Christian values to other people, Archbishop Linh said.

He said celebrations will last until Oct. 16 when Vietnamese bishops consecrate La Vang Basilica at the National Shrine of Our Lady of La Vang.

When Hue Diocese was established, it had 24,000 Catholics served by 10 priests. It was elevated to archdiocese status in 1960 when the Vietnamese Church hierarchy was established, according to Father Stanislas Nguyen Duc Ve, an expert in local church history.

Today the archdiocese has 200 priests and 1,100 religious serving more than 63,000 Catholics in Quang Tri and Thua Thien Hue provinces.