Breakthrough enables more than 170 eye operations in one week 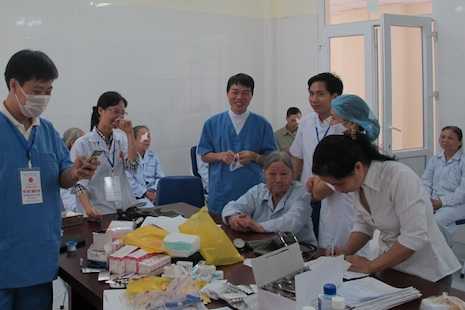 Church workers and government officials in a northern diocese are being allowed to provide free healthcare to thousands of poor people in two provinces.

In the past, government authorities in Lao Cai and Phu Tho provinces refused permission for the Church to get involved in healthcare. By law, religious organizations are not allowed to provide such services for people in Vietnam.

But now, according to Father Joseph Nguyen Van Thanh, pastor of Lao Cai parish, “authorities have allowed the local Church to take part in health care and charity work they prevented or interfered with in the past. The government has not only kept its promises but is allowing Church workers to use state-run facilities."

He attributes the change to a 2011 meeting between Lao Cai provincial authorities and Italian Archbishop Leopoldo Girelli, the non-resident pontifical representative for Vietnam. The archbishop requested Catholic involvement in health care, education and charity work as a contribution to social development.

Local Caritas workers have given free ocular operations to 1,200 patients and free medicine and treatment to an additional 600 elderly people at state-run hospitals since last year. This week alone they are performing 170 eye operations.

Fr Thanh said the government is now encouraging the local Church to set up hostels and vocational centers for ethnic minority students.

The government saves money since services provided by the Church are covered by benefactors.

“We are grateful to Caritas workers for giving medical care to poor people. Both the government and the Church have duties to serve the people," said Nguyen Thi Bac, vice-chairwoman of People’s Committee of Lao Cai city.

Ly Thi Hao, a 70-year-old woman, suffered from cataracts four years, but didn't have the three million dong (US$150) to have an operation at a local hospital. “Now I can see clearly. I am extremely grateful,” she said.

Father Paul Nguyen Quoc Anh, head of Caritas in the diocese, noted that government officials in other provinces still refuse to give permission for Caritas to carry out services. “They have also asked us to give them money to look after patients, but we refused because we fear poor patients would not get benefits,” he said.