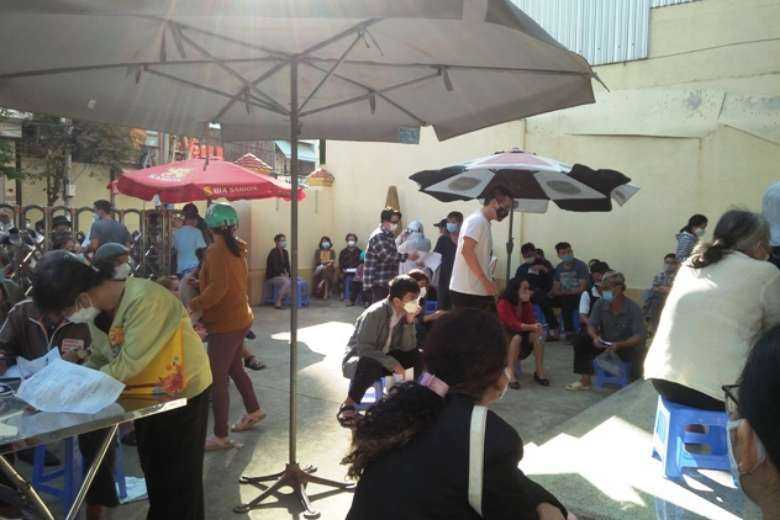 People wait their turn to get a Covid-19 booster dose in Nha Trang in Khanh Hoa province of Vietnam on Jan. 16. (Photo: UCA News)

Many cities and provinces in northern Vietnam are imposing harsher measures to contain the coronavirus as domestic migrant workers return home for the Tet or Lunar New Year festival.

Hoang Thanh Tung, head of the National Assembly’s Law Committee, complained on Jan. 18 that some provinces imposed compulsory medical tests and strict quarantine up to 14 days ahead of the Tet festival to be celebrated from Jan. 31 to Feb. 4.

He said that in other places, homes where people were kept in quarantine were being locked from outside as a precautionary measure by authorities.

Pham Ngoc Thao, head of Cao Bat Lu hamlet in Thai Binh province’s Kien Xuong district, reportedly locked in a woman and her two grandchildren aged seven and 10 after they returned home from Hai Phong, a Covid-19 epicenter, on Jan. 9.

The family were isolated inside their home for seven days even though the children had tested negative. When local people got annoyed by this inhuman action, a public apology was issued by Nguyen Thanh Khoa, head of the Nam Cao commune, on Jan. 18.

A similar incident was reported at the Thieu Phu commune in Thanh Hoa province. The affected family had returned home from Binh Duong province for the festival after several years, it was reported.

As a result, many families reportedly missed their flights and called on the ministry to abolish the regulation at the earliest.

Quang Ninh provincial officials have opened public quarantine facilities for migrant workers returning from high-risk areas. Even those who are fully vaccinated will have to quarantine and get tested regularly.

At least 13 provinces and Hai Phong City reportedly imposed harsher restrictions on migrant workers returning from other places to contain the pandemic.

Tung called on the central government to work with provincial officials to have uniform and proper safety regulations so that people could easily come home for the Tet festival.

Many people complained about the Transport Ministry’s unreasonable regulations that make negative test results mandatory before allowing children less than 12 years old on domestic flights. Children that young are yet to get vaccinated and there were fewer facilities for testing them.

As a result, many families reportedly missed their flights and called on the ministry to abolish the regulation at the earliest.

People demanded uniform health safety regulations from the central government to be followed by local authorities throughout the country to avoid public inconvenience to millions during festive times.

On Jan. 18, the Southeast Asian country recorded 16,838 new infections and 184 deaths. The capital Hanoi was the epicenter with 2,935 cases.

More than 80 percent of its population of 96 million has received at least one dose of a vaccine.