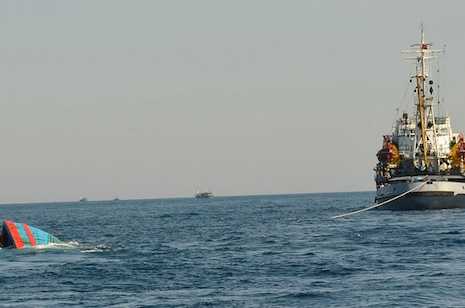 China has accused Vietnam of ramming its ships more than 1,400 times in a disputed part of the South China Sea and said while it wanted good relations with its neighbour, it would not abandon principles to achieve that.

China claims most of the South China Sea and has over the past two years been taking various steps to assert its claim, angering Vietnam and the Philippines in particular.

Shortly after China brought its oil platform into the area, Vietnam sent a large number of vessels into the area, China's Foreign Ministry said on Sunday.

"There were as many as 63 Vietnamese vessels in the area at the peak, attempting to break through China's cordon and ramming the Chinese government ships a total of 1,416 times," the ministry said.

China has asked Vietnam more than 30 times to "stop its illegal disruption", the ministry said.

A Vietnamese fishing boat sank on May 26 during a confrontation not far from where China has towed the oil rig, accompanied by a cordon of Chinese vessels, 240km off Vietnam.

Scores of Vietnamese and Chinese ships have squared off around the oil platform since it was towed to the area in early May.

Vietnam says the platform is in its 200-nautical mile exclusive economic zone and on its continental shelf. China says it is operating within its waters.

The dispute is the most serious deterioration of relations between the Communist states and traditional rivals since a brief war in 1979 following Vietnam's invasion of Cambodia.

Meanwhile, China denounced Vietnam and the Philippines on Monday for getting together on a disputed island in the South China Sea to play football and volleyball, calling it "a clumsy farce".

The comments on Sunday by a foreign ministry spokeswoman were China's first response to the gathering on the Vietnamese-held island of Southwest Cay.

Philippine naval officials described the meeting of soldiers from the two sides as a chance to show there can be harmony despite a web of overlapping claims to the potentially energy-rich waters.

"Don't you think this small move together by Vietnam and the Philippines is at most a clumsy farce?" China's Hua Chunying said at a daily foreign ministry briefing.

"China has irrefutable sovereignty over the Spratly Islands and the seas nearby."

The Philippines, Malaysia and Brunei claim some of the Spratly, while China, Taiwan and Vietnam claim the whole chain.