Activists offer incense in front of the altar of the late Le Dinh Kinh on Feb. 1. (Photo courtesy of Huong Lan’s Facebook)

A well-known rights activist has appealed to American diplomats to help victims of last month’s deadly clash between villagers and police over disputed farmland on the outskirts of Hanoi.

Trinh Ba Phuong said on Feb. 6 that he had met three officials from the US embassy in Hanoi about the clash that left four people dead on Jan. 9 in Dong Tam Commune.

Phuong told the diplomats during the two-hour meeting that the victims and activists wanted the US and the international community to work with Vietnam to conduct an independent investigation into the clash, which claimed the lives of three police officers and 84-year-old community leader Le Dinh Kinh.

Another 27 people were arrested and charged with acts of terrorism, using illegal arms and fighting against military personnel, according to the public security ministry.

Phuong, who initiated a fundraising campaign to help the victims, said a probe into the incident would help bring justice to victims and protect innocent detainees from having to serve possible heavy sentences. 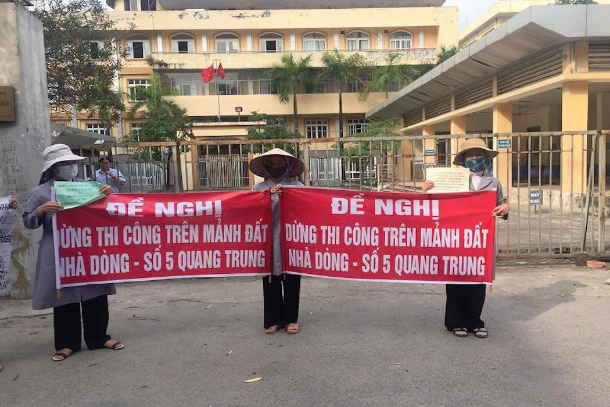 The activist said the US diplomats promised to give due consideration to his suggestions.

Thanh described what happened to her family members on the early morning of Jan. 9. She said at 3am many flying squad officers and police attacked her home with bullets, grenades and tear gas which made her family suffocate.

“Police brutally beat and drove me and my children and grandchildren to a local police station,” she said, adding that she did not see Kinh being taken out of the house.

Thanh said police brutally tortured them and forced them to kneel down on the floor while answering their questions. Many people were beaten to blood, broken bones and unconsciousness.

Police allowed her and her daughter-in-law and two babies to return home the following day “so as to hold her husband’s funeral.”

“However, three days later we were allowed to enter our house because police surrounded and searched throughout the house,” she said. They took away all their money, gold jewelry, a car and land ownership papers.

She said she is worried about her son Le Dinh Chuc, whose whereabouts are still unknown since the crackdown happened.

Thanh, who has five relatives detained, said relatives of all 27 detainees have not heard any information about them. “We plead with all people and foreign diplomats to save my relatives who are kept in prison,” she said.