Even 11 years later, hundreds are yet to get their own homes, while some have left their Odisha villages and lands forever Women sit with the cloth bags they made after being trained by a church group in the Kandhamal district of Odisha, which was hit by an anti-Christian riot 10 years ago. (Photo supplied)

Liza Nayak was a playful 13-year-old girl when mobs of sword-wielding Hindus attacked her village in eastern India, butchered her relatives and friends, and set their homes on fire — all because they refused to abandon their Christian faith.

Along with her parents, she and several hundred others escaped into the nearby forest and stayed there for weeks, living off only what they could find there, to escape the 2008 anti-Christian riots in Kandhamal district of Odisha state.

“Fighting hunger and uncertainty, I still remember my uncle quoting the Bible and saying: He will never forsake you. Do not be afraid; do not be discouraged,” says Liza, whose uncle was killed in the riots.

The repercussions of the riots were grueling for Liza and children like her. Thousands of them lost their homes, hundreds dropped out of school and several became orphans. Their futures became bleak.

“When God is with us we don’t have to be afraid … because he has his own ways. I have experienced it,” she says with a smile, explaining how God turned her “desperate and uncertain future” into one of peace and hope.

Liza was lucky enough to finish her studies at her government high school but still couldn’t find work. Every time she applied for a job, the employers were looking for someone with a university degree, plus added skills and work experience. “It was as if I would never get a job,” she recalls.

Now, however, she has found employment with the state government’s health department as a data-entry employee, thanks to computer training funded by a group of church people.

It was in 2017 that the women’s council of the Catholic Bishops’ Conference of India started focusing on this area of need. The decision to devote time to it was taken after a national meeting of the 22 delegates of the council in state capital Bhubaneswar.

The meeting also included a visit to the riot-affected areas, after which delegates unanimously decided the council should work there, particularly to help women and girls, says Sister Talisha Nadukudiyil, secretary of the bishops’ women’s council.

Their program included supporting volunteers, providing tuition to children and helping them gain admission into schools and other educational institutions run by the Catholic Church in the state and across India. 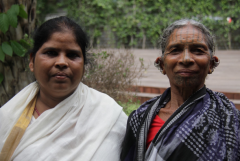 They also funded women like Liza for technical training, such as short-term courses in computer studies and tailoring, to help them usefully prepare for future employment. Women walk with sewing machines donated by a church group in the Kandhamal district of Odisha, which was hit by an anti-Christian riot 10 years ago. (Photo supplied)

The projects they fund, says Sister Nadukudiyil, include vocational training like stitching and embroidery; last year they also donated some sewing machines to the women.

“The council also plans to support promising young people to study professional courses such as nursing and engineering. For this, we plan to raise funds from various sources. The programs only started in June 2018 but 24 women have already benefited," she says.

“We want riot victims … to experience the Church’s concern and care.”

Just like Liza, 25-year-old Mili Nayak is also a beneficiary of church work and, thanks to funding by the women’s council, is now doing a master’s degree in social work in the state capital. “I want many more girls to get educated so that our society can be helped to progress,” says Mili.

Sister Pancrasia Toppo, secretary of the Cuttack-Bhubaneswar archdiocesan commission for women, manages a tailoring training program to help mothers in the villages.

She says the government was “constantly watching” them to make sure they did not become involved in other activities such as proselytization because the program includes women of all religions. Their primary targets were, however, affected Christian women.

Rihila Digal, a 25-year-old mother, attended the class for almost a year and became confident that she could make bags and sell them in the market.

“My husband also got a job as a pastor last year, so we are somehow managing the family, even though we have had no proper house since being displaced by the riot,” she says.

Even now, 11 years after the riots, life still has not returned to normal in Kandhamal, she says. Hundreds are yet to get their own homes, while some have left their villages and lands forever and live as migrants in their own land.

At least 100 people, mostly Christians, were killed and more than 56,000 people were rendered homeless in the month-long riots that ravaged Christian homes and villages. Hundreds of churches and houses were destroyed in the mayhem.

The process of justice has also been chaotic. There have been more than 3,300 complaints, of which only 820 were admitted. Of those that were admitted, only 518 resulted in charges being laid. Most of those were dismissed and in the end fewer than 10 prosecutions ended with convictions.

Spanish Vincentian missioners began evangelizing the tribal-dominated Kandhamal area a century ago but the region saw a rise in hard-line Hindu activities as the number of Christians began to grow over the last five decades.

“It is a gesture of compassion and kindness toward Kandhamal survivors,” says the priest of the archdiocese that covers Kandhamal. “Great things happen when people cooperate with God … and I’m sure one day we will succeed.”