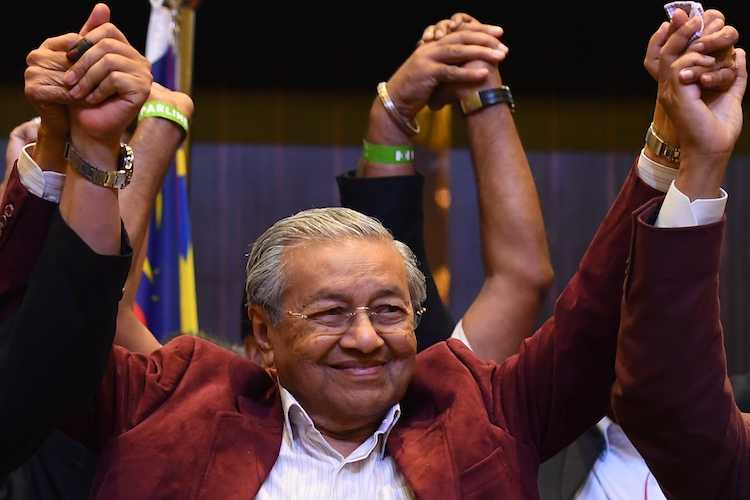 Mahathir Mohamad celebrates his historic Malaysian election victory with his coalition leaders during a press conference in Kuala Lumpur on May 10. (Photo by Manan Vatsyayana/AFP)

In a remarkable show of people power, Malaysians showed the long-ruling Barisan Nasional coalition and Prime Minister Najib Razak the door, an act that many predicted could not be done easily after he had rigged the system.

The election commission finally declared just before 5am on May 10 that Mahathir Mohamad's opposition alliance had won 115 seats in the 222-seat parliament. The alliance needed 112 seats to form a government.

After a long night waiting for the commission to sign off on the country's 14th general election, Mahathir said he hoped a swearing-in ceremony would be held on May 10.

Mahathir, 92, was Malaysia's prime minister from 1981 to 2003, making him the longest-serving holder of that office. His political career has spanned more than 70 years since he first joined a newly formed United Malays National Organisation (UMNO) in 1946.

The governing Barisan Nasional coalition has been in power for more than 60 years.

A government spokesman has declared May 10-11 as nationwide public holidays.

Mahathir said his new government will not seek revenge on Najib, who has been accused of corruption in the 1Malaysia Development Berhad (1MDB) sovereign wealth fund scandal where billions of dollars went missing.

At a press conference to declare the victory of his Pakatan Harapan (Alliance of Hope), Mahathir reiterated what he said on the campaign trail that the new government would uphold the rule of law.

"We are not seeking revenge. What we want is to restore the rule of law. If anybody breaks the law, they will be brought before the court to be tried," he told a packed ballroom at Sheraton Hotel in Petaling Jaya.

He said the new government will also work towards obtaining a pardon for Anwar Ibrahim, who is set to be released from his five-year prison sentence next month.

"We will work on Anwar Ibrahim's pardon. Once he's pardoned, then he's eligible to become prime minister again, but he will have to stand in an election or at least [be appointed as] a senator to be the prime minister," he said.

Asked whether Najib had accepted defeat, Mahathir quipped that the Pekan MP has been silent on the matter. "I haven't heard from him ... He's gone silent," said Mahathir, who was backed by Pakatan Harapan leaders and winning candidates.

Official results showed the Pakatan Harapan alliance, along with an ally in Borneo's Sabah state, had won 115 seats, with Barisan Nasional on 79 seats.

Its popularity started to decline in recent years. In the 2008 election, the opposition made gains and in the next one in 2013 it won the popular vote but failed to win enough seats to form a government.

However, further progress was stalled when then opposition leader Anwar, once Mahathir's protege, was sentenced to five years in jail on sodomy charges, which he dismissed as a smear campaign.

Mahathir abandoned the ruling coalition in 2016, "embarrassed" to be associated with a party "that is seen as supporting corruption" after Najib was accused of pocketing some US$700 million from the 1MDB fund. He is accused of removing key Malaysian officials scrutinizing the fund.

Criticism of Najib grew when his government redrew election boundaries recently to ensure they were filled by Malay Muslims, who are traditionally Barisan Nasional supporters.

The government paid little heed and cracked down further on criticism by passing a fake news law that many feared would be used to stifle dissent.

Mahathir is himself being investigated under that law after alleging that the plane he was due to travel in had been sabotaged to prevent him filing his candidacy papers on time for this election.