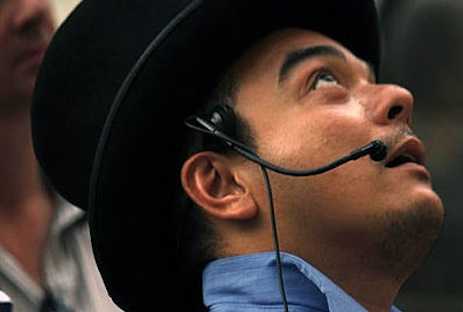 Activists are protesting against the conviction of reproductive health activist Carlos Celdran on charges of offending religious feelings.
"This is a setback for free speech in the Philippines, which prides itself on being a democracy," said Carlos Conde of Human Rights Watch-Asia on Tuesday.
"This verdict should be reversed. Nobody should be jailed for voicing out an opinion or position, especially on a subject that concerns the lives of millions of Filipino women and mothers," he said.
Celdran, was arrested and jailed in September 2010 for disrupting a Catholic Mass when, dressed as the Filipino national hero Jose Rizal, he shouted inside Manila Cathedral in protest on Sept. 30, 2010. Monsignor Nestor Cerbo of the Manila Cathedral filed the complaint.
The Metropolitan Trial Court of Manila yesterday found Celdran guilty of offending religious feelings under a provision in the country's Revised Penal Code which states that it is a punishable offense to disrupt a gathering "in a place of worship or during the celebration of any religious ceremony." He will serve from two months and 21 days to a maximum of one year, 1 month and 11 days of imprisonment.
"All told, the positive declaration of the [prosecution] witnesses... [is] sufficient to satisfy the quantum of evidence needed for a criminal conviction," said Judge Juan Bermejo Jr.
Celdran, who is a tour guide at the colonial fort in Manila, is a vocal critic of the Catholic bishops' stand against the reproductive health law that allows the use of contraceptives to curb the rising population.
The one year jail sentence "is way too harsh for a misdemeanor," said ProGay spokesperson Goya Candelario.
ProGay called on Catholic bishops to be more open to a new dialogue of understanding between the Church and groups that are becoming alienated from its teachings, in order to prevent ugly confrontations and find a way to move forward.
In an interview with GMA News Online, Celdran—who is out on bail—said he was willing to appeal his case all the way to the Supreme Court.
The case "proves that any parish priest can put you in jail if he is offended," he said.
"This issue will just get bigger. It's a freedom of speech issue," Celdran said. "I'm ready to fight," he said, adding that he will move for the abolition of a section on the Revised Penal Code pertaining to offending religious feelings.