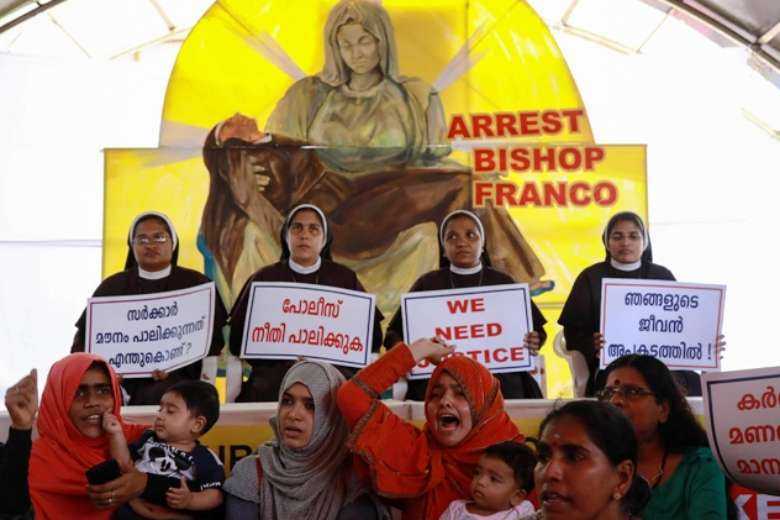 Indian Catholic nuns along with supporters demand the arrest of Bishop Franco Mulakkal, accused of raping a nun, in Kochi in the southern state of Kerala on Sept. 13, 2018. (Photo: AFP)

The trial in the rape case involving Bishop Franco Mulakkal has concluded and the special court in Kottayam in the southern Indian state of Kerala is set to deliver its verdict on Jan. 14.

Bishop Mulakkal was accused by a nun of sexually abusing her between 2014 and 2016 in a complaint registered with Kerala police in June 2018. Police filed a 2,000-page charge sheet against him in April 2019.

Additional District and Sessions Judge G. Gopakumar on Jan. 10 completed the trial procedure including recording the statements of the victim, accused, witnesses from both sides and the final legal arguments.

The prelate stands accused of raping a former superior general of Missionaries of Jesus, a diocesan congregation under the patronage of the accused as the then bishop of Jalandhar Diocese in the northern state of Punjab.

The nun in her complaint had accused the bishop of raping her multiple times during his visits to her convent in Kuravilangad town in Kerala. The prelate has also been accused of wrongful confinement and criminal intimidation among others.

The special court held the entire proceedings of the trial in-camera after Bishop Mulakkal’s appeal to the court to restrain the media from covering the proceedings.

The prelate has consistently denied all the allegations against him and in a video message appealed to everyone to continue to pray for him.

The prelate asserted that whatever the outcome the verdict will be accepted.

Bishop Mulakkal was arrested and jailed after supporters of the nun staged a public protest in September 2018. He was granted bail by Kerala High Court.

Though he continues to hold the title of Jalandhar's bishop, the diocese is being helmed by a Vatican-appointed administrator.

Bishop Mulakkal is the first Indian bishop to face such heinous charges and many faithful demanded that he be stripped of the title of bishop until completion of the trial, but the Vatican did not concede it.

Church leaders maintained that a decision on his title would be taken after the court verdict. The verdict could have serious ramifications for the Church in India where Christians face increased persecution from right-wing Hindu groups.

SIMON JOSEPH
UCA News is, no doubt, an agency to spread anti- church news only
Reply

SIMON JOSEPH
Darlings of the An immoral woman who had raised a False Sexual Harassment complaint against the Saintly Bishop Franco : These crucial points would suffice to prove that her accusation was a Himalayan lie : 1) Her own first cousin having given a complaint in writing that the said lady ( Complainant nun who was the Mother General ????)used to come to her home in her absence, after she had gone to her office which was at a very far off place from the Convent only to seduce her husband into an immoral relationship, in support of which she had referred to 23 SMS messages sent to him from the Convent during odd hours - 2 am and 3 am! 2) That she had siphoned off funds to the tune of millions from her Congregation of which she was Mother General for three terms of 3 years each. 3)And the proceeds of those looted money were utilized by her brother who has no means- a goonda ! -to construct a multi-storied commercial complex. 4) That she ( Complainant nun )had asked the Mother General in writing for permission to leave the Congregation, but had to cancel her decision and come back (after asking for permission ) as her Goonda brother compelled her to do so - he wanted to enjoy all the loot on his own ! 5) The accusation of having been raped 13 times during a period of 15 months is actually making a mockery of the intelligence of an average Indian ! During this period she is Happily participating in umpteen functions at the ancestral home of the Bishop,like funeral of his mother and other functions ! Some simple souls have been misguided to believe, she is a poor nun who had no means ???? She had ruled the Congregation for three terms of 3 Years each ( her tenure? 9 Long Years as Mother General, and defeated in the 4th Attempt to be Mother General,once her immorality and financial infidelity came into the open???? And this false sexual harassment allegation against Bishop Franco, the Diocesan Head,was only her modus operandi to block the disciplinary action against her contemplated by the Congregation once her immorality, financial infidelity etc came into the Open in the Enquiry ???? ????'
Reply