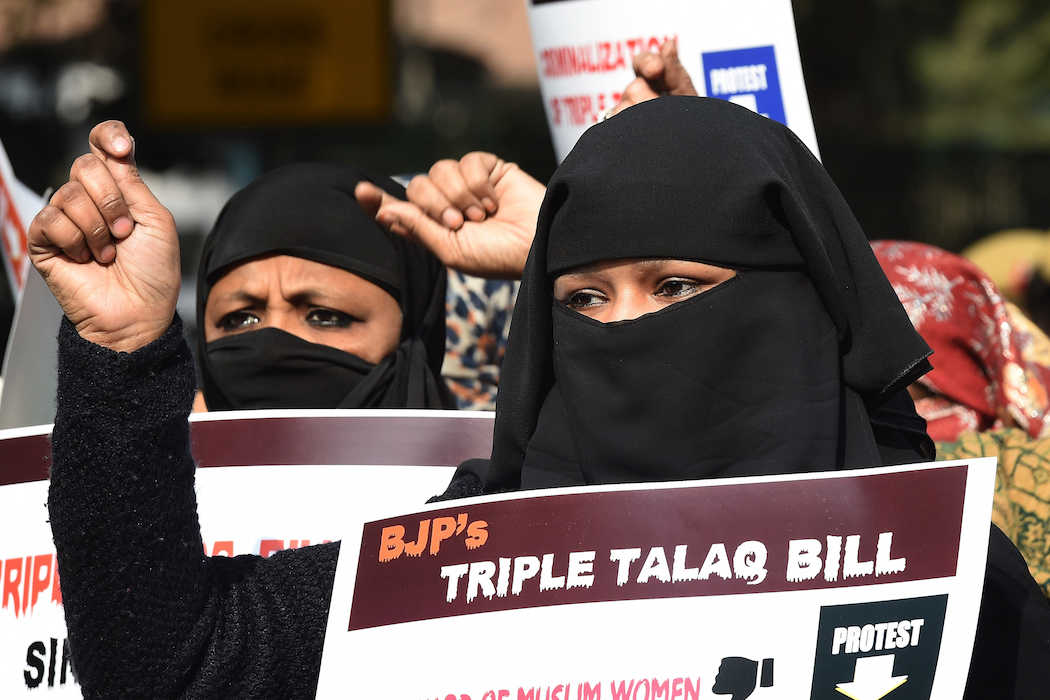 Women India Movement activists shout slogans as they hold placards against the triple talaq bill during a protest in New Delhi on Jan. 4. (Photo by Prakash Singh/AFP)

In August 2017, the Supreme Court called the practice of triple talaq "un-Islamic, arbitrary and unconstitutional." Following the court direction, the pro-Hindu Bharatiya Janata Party (BJP) introduced a bill to ban it that was passed in the lower house of parliament last December.

But it was stalled in the upper house after opposition parties were divided on several aspects of the legislation amid criticism that the government was targeting the Muslim community.

"The triple talaq issue is not about faith. It is about gender equality and justice," Union Minister Ravi Shankar Prasad told a function in Hyderabad city last week.

In several states, especially Uttar Pradesh and Telangala, the practice continues, the minister said as he called for support from opposition parties to help the bill become law.

The BJP, which initiated the bill, has accused opposition parties of opposing the bill for political reasons because they are afraid of losing votes from India's 172 million Muslims.

The opposition has criticized the ruling party for not considering amendments to make the law milder in line with the sensitivities of Muslims.

Several local political parties have faced immense pressure from religious groups in their constituencies to turn down the bill, which stipulates a three-year jail term for offenders.

Reports say at least 22 Islamic countries have banned triple talaq, which was traditionally supposed to be done over a period of three to four months to allow married couples to attempt reconciliation.

However, it became common to complete the process in one go, saying the Arabic word talaq (divorce) three times to obtain an instant separation. Some people even used social media and email for such divorces.

Several Muslim groups, including the All India Muslim Personal Law Board, have challenged the government's authority to criminalize a religious practice.

Some groups also view the proposed law as an intentional attack on the religious freedom of Muslims by the pro-Hindu BJP.

"The government move is wrong," said Mateenuddin Quadari, a member of the All India Muslim Personal Law Board in Telangana state.

He said the practice is now rare because "only some uneducated people do that." Problems such as these should be resolved within the community, Quadari said

Rights activist Jameela Nishat of Telangana capital Hyderabad said several women divorced by triple talaq have approached her to seek help. "But since there is no law, we are helpless," she said.

The chief quazi or Muslim religious body that approves marriages and divorces in Hyderabad has stopped considering triple talaq as a valid form of divorce, Nishat said.

Muslim men have reportedly even used postcards, newspaper advertisements and text messages to say talaq three times to get a divorce, in most cases without even giving any notice to their wives.

Nishat said surveys show that more than 90 percent of women do not get any compensation in such divorces. Most women are also opposed to the practice.