As another Ahmadi is murdered, fear and insecurity are growing among the persecuted community Rickshaws emblazoned with hate messages against Ahmadis have been whizzing around Peshawar since the murder of a man accused of blasphemy in a court last year.

“Qadiani [Ahmadis] are traitors of both Islam and the country,” states one banner, quoting Allama Iqbal, Pakistan's renowned poet-philosopher.

Others depict rose petals on Khalid Khan, the teenager who killed Tahir Nasim, a US citizen accused of blasphemy, inside a court in this northwestern city last July. “Long live Khatm-e-Nubuwwat [Finality of Prophethood],” states the banner.

Nasim was a former member of Pakistan’s minority Ahmadis, who were declared non-Muslims by Pakistan’s parliament in 1974. They are prohibited by law from identifying themselves as Muslims. Their freedom of worship remains curtailed by a series of ordinances and constitutional amendments. The community is often targeted by conservative Muslims who consider them heretics for believing that Muhammad was not the last prophet.

According to Saleem Ud Din, a spokesman for Pakistani Ahmadis, four Ahmadis in Peshawar have become victims of fatal attacks in recent months.

“These attacks are creating a sense of deep insecurity among the members of the community while the Ahmadis of Peshawar are living in a deep atmosphere of fear. Ahmadis in Pakistan are left at the mercy of terrorists and extremists while the government has repeatedly failed to protect and stop the violence,” he said in a Feb. 11 press release.

The statement was issued hours after 65-year-old Abdul Qadir, an Ahmadi doctor, was shot dead on the doorstep of a medical center in the Bazid Khe area of Peshawar district in Khyber Pakhtunkhwa province. His 19-year-old killer was caught by employees of the clinic and handed over to police.

“Qadir was facing persecution because of his faith and as such he shifted his entire family far from Peshawar to a safe location. The perpetrator of this vicious attack should be brought to justice,” said an Ahmadi spokesperson, expressing his concerns over the increase in the hate campaign against his community in Pakistan in general and especially in Peshawar.

Ahmadis are considered by mainstream Pakistani Muslims as heretics because of their belief that their founder Mirza Ghulam Ahmad was a prophesized messiah. Taking evangelism on the road 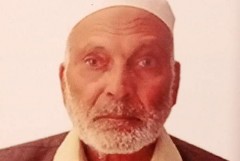 A recent fact sheet by the Centre for Social Justice (CSJ) claims that at least 1,855 people were charged with offenses related to religion, mostly under blasphemy laws, from 1987 to 2020.

The highest number of accused (200) was reported last year. Seventy five percent of accused were Muslims, while the largest number of victims (70 percent) belonged to the Shia sect. The others were Ahmadi (20 percent), Sunni (5 percent), Christian (3.5 percent) and Hindu (1 percent).

“These statistics depict Pakistan as a place where abuse of blasphemy laws is the highest in the world. The law is frequently used to inflict despicable and multiple human rights violations, including physical violence, loss of property and livelihood, evictions and loss of life. It is not only the accused but sometimes the entire family and community which undergo the suffering after allegations are leveled,” the CSJ stated.

Lutheran Bishop Jimmy Mathew of Mardan in Khyber Pakhtunkhwa blames the hate banners on rickshaws for the increasing attacks on Ahmadis in Peshawar.

“The recent wave of extrajudicial killings began after the murder in court. The advertisements on local rickshaws are inspiring more young people to become Ghazis [an honorific title for a Muslim warrior]. The government should take action to remove these banners,” he told UCA News.

“This is dangerous for the society. Today its Ahmadis. Tomorrow it can be us or even the other sects of Muslims. Even church-run groups are pressurized to ban Ahmadis in their meetings.”

Father Sohail Patrick of St. Michael's Catholic Church in Peshawar also condemned the killings. “Unfortunately, humanity is losing to intolerance in our society. All faiths who lead to God must be respected,” he said.

Professor Taimur Rehman, a political activist and member of liberal rock band Laal, has initiated a rickshaw campaign to spread the message of tolerance of Bulleh Shah, a poet in the Sufi mystical tradition of Islam.

“Responding to the rise in sectarianism and extremism, the Laal peace campaign now covers 500 rickshaws in Lahore,” it stated in a recent Facebook post.