Christians and Muslims share a conviction that God calls them to be "witnesses, restorers and builders of hope" both in this life and for the life to come, said the leaders of the Pontifical Council for Interreligious Dialogue.

In a message wishing Muslims a peaceful and fruitful month as they fast during Ramadan and a joyful celebration of Id al-Fitr when Ramadan is over, the officials focused on the religious value of hope and its importance today amid the coronavirus pandemic.

For believers, they said, "hope arises from our belief that all our problems and trials have a meaning, a value and a purpose, however difficult or impossible it may be for us to understand the reason for them or to find a way out of them."

In addition, they wrote, "hope also carries with it belief in the goodness present in the heart of every person. Many times, in situations of difficulty and despair, help, and the hope it brings, can come from those whom we least expect."

But hope also "has its enemies: lack of faith in God's love and care; loss of trust in our brothers and sisters; pessimism; despair and its opposite, unfounded presumption; unfair generalizations based on one's own negative experiences, and so forth," the message said. "These harmful thoughts, attitudes and reactions must be effectively countered so as to strengthen hope in God and trust in all our brothers and sisters."

In adopting this spirit, we imitate God, who looks benevolently upon the humanity he created

The suffering and sorrow caused by the COVID-19 pandemic and lockdown precautions to slow its spread, they said, reminded believers of the need both for divine assistance and for "gestures of fraternal solidarity," ranging from a simple telephone call to help buying medicines or food.

All who helped others during the pandemic and all who respond generously in times of disaster "remind us believers that the spirit of fraternity is universal, and that it transcends all boundaries: ethnic, religious, social and economic," the message said. "In adopting this spirit, we imitate God, who looks benevolently upon the humanity he created, upon all other creatures and upon the entire universe." 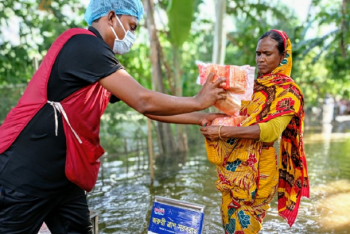