Nissan has donated an electric Nissan Leaf to the Vatican, helping the Vatican gradually replace its service vehicles with an all-electric fleet. (Photo: GreenFleet)

Marking World Environment Day and preparations for a major global meeting on climate change in November, the Japanese automaker Nissan delivered a 100 percent electric Nissan Leaf to the Vatican.

The Nissan Leaf is manufactured for European markets in Sunderland, England. According to a company press release, as part of its global journey to net zero emissions, Nissan will have an electric version of all its vehicles available in Europe by the end of 2023.

In a statement, Axworthy said that "transitioning to electric vehicles will be an essential part of our collective efforts to keep global temperature rises below 1.5 degrees. In the year in which the UK will host the climate summit, COP26, I am really delighted that the Vatican is greening its vehicle fleet with the help of Nissan. This sets an excellent example for us all."

The production of the Leaf in England, she said, "shows how technology can bring sustainable economic growth and dignified employment."

The Japanese ambassador said, "As Pope Francis called for urgent action on climate change, it is particularly significant that the Vatican will gradually replace its service vehicles with an all-electric fleet, setting an example for all other countries of the world. The contributions of companies like Nissan will be vital to achieving this aim." Benedict gets a green popemobile 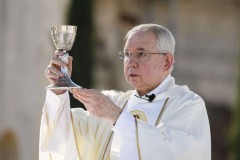