Discussions and decisions are not for public review, says spokesman 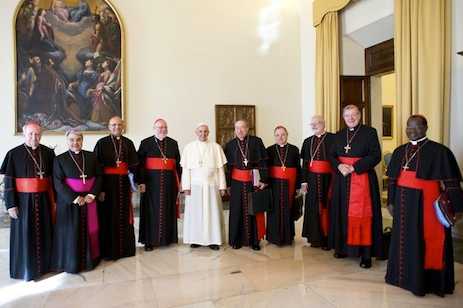 Pope Francis' first meeting with eight cardinals advising him on reforming the church saw the group take up a wide range of themes, including reform of the Vatican bureaucracy and the role of the laity, the Vatican said Wednesday.

The spokesman made available some details of the group's meetings at a press briefing Wednesday. But Lombardi said observers should not expect too much more information about the sessions, saying they are a "council for the pope's governance."

The meetings are not meant to generate documents for review by the faithful, Lombardi said. The pope will communicate any decisions made as a result of the cardinals' advice personally, he said.

"We have to liberate ourselves from the expectation of [having] documents or decisions from this council," Lombardi said. "The fruits are in good decisions of the pope, borne in knowledge of the needs of the universal church, form the cardinals and from others the pope may consult."

The cardinals' group, known officially as the Council of Cardinals, is meeting at the Vatican for the first time Tuesday through Thursday. The meeting, the first of its kind, has generated speculation over what kind of things might be on the cardinals' agenda or what kind of reforms might be expected to result.