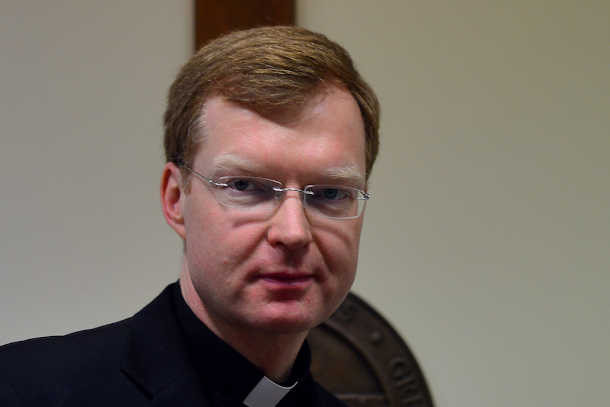 A file image of Father Hans Zollner, SJ, who one of the organizers putting together a task force made up of child protection experts. (Photo by Gabriel Bouys/AFP)

Since the work of child protection must continue after a February meeting at the Vatican on safeguarding, one organizer said they plan on creating a "task force" with teams on every continent.

The task force would be just one of a number of "concrete measures that we want to offer the bishops of the world," Jesuit Father Hans Zollner told the Vatican newspaper, L'Osservatore Romano on Jan. 24.

"One of our main ideas," he said, "is that this encounter is another step along a long journey that the church has begun and that will not end with this meeting," which will bring presidents of the world's bishops' conferences, the heads of the Eastern Catholic churches and representatives of the leadership groups of men's and women's religious orders to the Vatican Feb. 21-24.

A task force made up of child protection experts "will probably be instituted in the various continents where the church is present," and they will travel from place to place, said Father Zollner, who is a member of the meeting's four-person organizing committee, president of the Centre for the Protection of Minors at the Pontifical Gregorian University and a member of the Pontifical Commission for the Protection of Minors.

"They will be able to find out about the guidelines that the bishops' conferences are about to implement, what point they are at in this process and what they may need," he said.

"They will seek to understand how they can help [the bishops], how to provide them information," but also share with them "the most valuable solutions that have already been tried out on other continents," said Father Zollner.

That way, he said, the different "teams" of the task force should be able to help, "for years to come, to measure the success of this exercise of realizing one's own responsibility, even on the global level, in the face of public expectations."

In the newspaper interview, Father Zollner said organizers hope all those who attend the meeting will clearly understand current norms and the issues of responsibility and transparency when it comes to safeguarding minors from abuse and will "truly be able to implement what has been talked about."

"And finally, we want to see how we can make it so that they not only understand the procedures, the norms" to follow concerning safeguards and handling allegations, "but also how we can motivate people to dedicate themselves to put things into action and not dilly-dally."

Another resource available in the run-up to the summit is a collection of articles published by the Jesuit journal, La Civilta Cattolica.

Titled "Safeguarding," it is part of the journal's "Perspectives" series and is available in English. The reprinted articles from 2002 to 2018 give readers a closer look at the scandal of sexual abuse and its psychological and spiritual aspects.

The volume outlines what has been done the past two decades, "the renewal of canonical norms, the formulation of guidelines by episcopal conferences, the development of formation projects and other initiatives, and also some significant recent letters by Pope Francis. It also enumerates a series of key issues the meeting will have to confront," said the journal's director, Jesuit Father Antonio Spadaro.