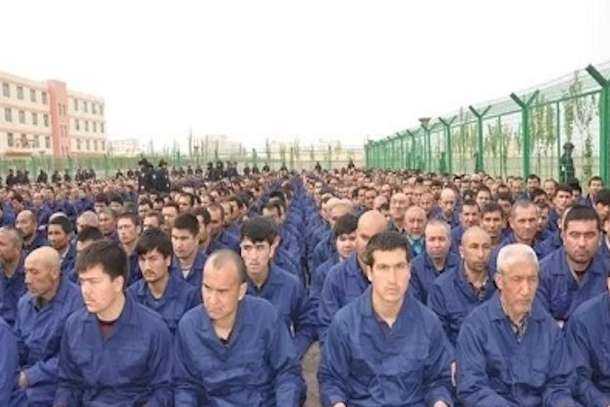 A 're-education camp' for Uyghurs in Xinjiang. New reports claim as many as half a million people have been forced into similar camps in Tibet. (Photo: Wikipedia)

China has dramatically extended its string of concentration camps from Xinjiang to Tibet, with new reports claiming as many as half a million people have been forced into what Beijing describes as “re-education” facilities in Tibet.

These are designed to erase cultures that do not fit in with the relentlessly Han-centric way of life being insisted upon by the ruling Chinese Communist Party (CCP). Many of the programs run in the well-documented camps are designed to erase religious practices and beliefs from ethnic minorities.

Anywhere else in the world this would immediate grab the attention and raise the ire of Pope Francis, but he now has an embarrassing history of giving the CCP a free pass, something that will come back to haunt the Holy See.

There have been spasmodic reports of camps in Tibet for many decades. In 2019, Voice of America documented the journal of a monk who was put into a re-education camp in 2017.

Pema Gyal, a Tibet researcher at the Tibetan Center for Human Rights and Democracy, said at the time that the journal made it possible to compare treatment at the re-education camps for Tibetans with what was known of the Xinjiang camps for Uyghurs.

“This diary shows there are many similarities between the re-education centers in Tibet and Xinjiang,” Pema Gyal said. “This shows the way political re-education campaigns about minorities are exactly the same. Like in Xinjiang where young women are reportedly raped, the monk’s journal [entries show] many nuns were raped in the Tibetan re-education centers.”

It’s worth noting that the CCP secretary in Xinjiang was formerly stationed in Tibet from 2011-16 and his move by leader Xi Jinping was seen as a hardening of Beijing’s program against the Uyghurs. Sure enough, not long after the move, construction of the Xinjiang camps began.

Now it seems that activity has ramped up again in Tibet, the CCP emboldened by its “success” in Xinjiang.

German researcher Adrian Zenz, who has been instrumental in bringing the Xinjiang abuses into the global consciousness, turned his attention to Tibet in a new report for the Jamestown Foundation.

“In 2019 and 2020, the Tibet Autonomous Region (TAR) introduced new policies to promote the systematic, centralized, and large-scale training and transfer of ‘rural surplus laborers’ to other parts of the TAR, as well as to other provinces of the People’s Republic of China (PRC). In the first seven months of 2020, the region had trained over half a million rural surplus laborers through this policy,” Zenz wrote.

“This scheme encompasses Tibetans of all ages, covers the entire region and is distinct from the coercive vocational training of secondary students and young adults reported by exiled Tibetans.”

The report says that the similarities to Xinjiang’s coercive training scheme are abundant. They have the same target group — rural surplus laborers — and a high-powered focus on mobilizing a “reticent” minority group to change their traditional livelihood mode. They employ military drills and military-style training management to produce discipline and obedience, emphasize the need to “transform” laborers’ thinking and identity, and to reform their “backwardness.” They teach law and Chinese and aim to weaken the perceived “negative” influence of religion.

The camps are of course a stain on China, the 21st century equivalent of the horrific gulags in Soviet Russia developed by its murderous and tyrannical dictator Joseph Stalin, themselves a slightly less murderous take on the concentration camps of Nazi Germany where six million Jews perished.

They are also something of a stain on the rest of the world. Once more we somehow find ourselves in a place where this type of inhumanity cannot just survive but thrives in the world’s most populous nation that also has one of its biggest economies and growing influence.

Just how insidious that influence is has been seen by the increasingly muted opposition to the camps in Xinjiang by other Muslim nations — only a handful, led by Malaysia, have spoken out. Many Western nations and the European Union have begun to speak out against what is effectively cultural genocide, but the Vatican has been notable for its silence.

It is immensely sad and deeply troublesome that the Vatican has decided to excise the plight of China’s 1.4 billion people from its otherwise admirable campaign against tyranny and against those who would visit horrors upon others simply because of their ethnicity or religion.

The huge tragedy of this decision is that it has happened before — and not so very long ago with the controversial silence of the Vatican on the fate of the Jews in Nazi Germany under Pope Pius XII.

History remembers the craven capitulation of the Vatican during the dark days of Mussolini’s Italy and Hitler’s journey as a deep stain on the Church. It will remember this one perhaps even more.