Vatican 'should not have faith' in any deal with Beijing A file image of Hong Kong Christians opposing the cross removal campaign in China holding a prayer service in 2015 out front of the Liaison Office of the Central People's Government in Hong Kong. (ucanews.com photo)

The Vatican should only make a deal about bishop appointments with Beijing if the ruling Communist Party allows religious freedom across China, says a leading rights group.

In a searing commentary, Sophie Richardson, the China director for New York-based Human Rights Watch, questioned why the Catholic hierarchy would bow to any involvement with a regime that suppresses matters of faith.

"Why would the leadership of a major world faith opt to relinquish the power to choose its own spiritual representatives to a government that has long imprisoned and punished those who fought for religious freedom?" asked Richardson.

She went on to write that if the Vatican accepts any deal with Beijing it is "underestimating six decades of intractable state hostility towards religion."

Richardson went on to describe the Chinese state's hostility towards Catholics and of other faiths in the country.

She highlighted the fate of two prominent underground clerics, one of whom, 94-year-old Bishop Shi Enxiang died while in police detention last year. He had already been imprisoned for five decades for his faith during which he was also tortured.

"Has Pope Francis asked Chinese authorities about these cases, or those of other persecuted Catholics? Has he inquired about the forced disappearances, prosecutions, or humiliations of other religious practitioners in China?" Richardson continued to ask.

"The Vatican should not take on faith any offers from Beijing until it offers religious freedom to all across China."

Richardson’s commentary came as the next round of talks between the two sides, to be held in Rome, were delayed from late October to an unspecified date this month, a priest knowledgeable about the issue, told ucanews.com.

"What I learned is that — so it seems — in early November there will be another round of negotiations and that it is expected that this time they will reach an agreement," Father Jeroom Heyndrickx, a veteran sinologist at the Verbiest Institute of Leuven Catholic University in Belgium, told ucanews.com

China 'should not be reelected' to UN Human Rights Council 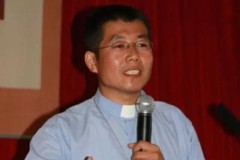 "This agreement is said to be on a modus vivendi on how to appoint bishops in agreement with Rome and Beijing and, hopefully, also the legalization of some illegal bishops. Let us all hope," said Father Heyndrickx.

Another source close to the Vatican told ucanews.com that any deal would not be made soon. It may not even come by the end of the year, the source said.