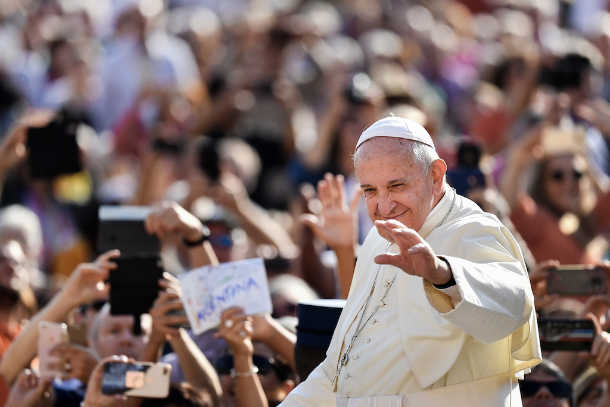 Pope Francis waves to worshipers as he arrives to hold his weekly general audience on Oct. 2 at St. Peter's Square in the Vatican. The pope is to visit Thailand and Japan in November. (Photo by Tiziana Fabi/AFP)

Pope Francis’ schedule for his apostolic visit to Thailand and Japan in November has been published by the Vatican.

He departs from Rome on Nov. 19 and after three full days in Thailand he travels to Japan for the second leg of his visit. He is scheduled to return to the Vatican on Nov. 26.

After arriving in Bangkok on Nov. 20, he will receive an official welcome at Military Air Terminal 2.

The pope will attend a welcome ceremony at Government House on Nov. 21 before meeting with Thai Prime Minister Prayut Chan-o-cha and government, civil society and diplomatic figures.

He will also visit the Supreme Buddhist Patriarch at Wat Ratchabophit Sathit Maha Simaram and medical staff and patients at St. Louis Hospital

After lunch at the apostolic nunciature, the pope will have a private meeting with His Majesty King Maha Vajiralongkorn at Amphorn Royal Palace before a Mass in Thailand’s National Stadium.

On Nov. 22, Pope Francis will meet with priests, religious, seminarians and catechists in St Peter’s Parish. He will also meet bishops, members of the Society of Jesus and religious leaders before a Mass with young people in the Cathedral of the Assumption.

The pope will fly to Tokyo on Nov. 23 and be welcomed at Tokyo-Haneda Airport before a meeting with bishops at the apostolic nunciature.

On Nov. 24, he will travel to Nagasaki and Hiroshima to give a message on nuclear weapons at the Atomic Bomb Hypocenter Park and pay tribute to the Martyr Saints at the Martyrs’ Monument.

On Nov. 25, he will pay a private visit to Emperor Naruhito at the Imperial Palace before meeting young people at the Cathedral of Holy Mary and taking Mass in the Tokyo Dome. He will also meet Japanese PM Shinzo Abe.

On Nov. 26, the pope will hold a private Mass with the Members of the Society of Jesus in the Chapel of Kulturzentrum of Sophia University.

His full schedule can be found here on Vatican News.