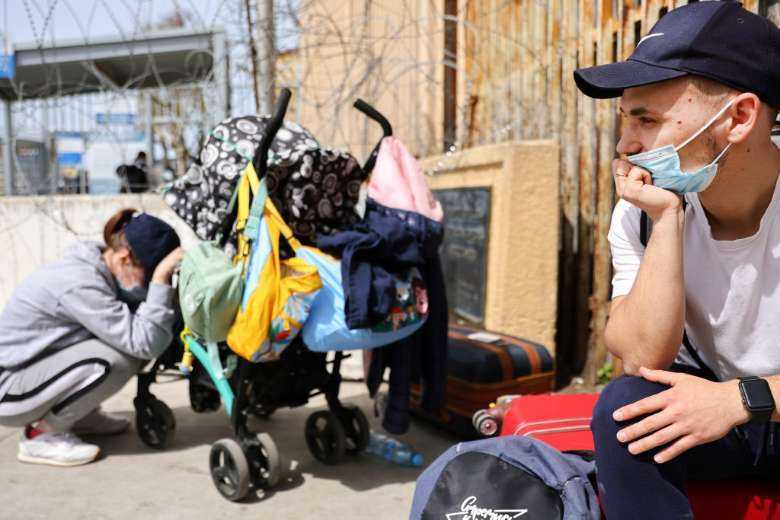 Russian asylum seekers Nastya (left), Artem and their son Samuil sit outside the San Ysidro Port of Entry after not being allowed to cross into the United States to seek asylum on March 21 in Tijuana, Mexico. (Photo: AFP)

Catholic communities are invited to grow in the joy of encounter and to recognize the new life that migrants bring with them, Pope Francis said, marking the release of a Vatican document on ministering to migrants in a multicultural world.

The "Pastoral Orientations on Intercultural Migrant Ministry" by the Migrants and Refugees Section of the Dicastery for Promoting Integral Human Development "invite us to broaden the way that we experience being church," the pope wrote in the preface.

"They urge us to see the tragedy of prolonged uprootedness, to welcome, protect, integrate and promote our brothers and sisters, and to create opportunities to work together toward communion," he wrote.

The Vatican released the 35-page document in English, Spanish and Italian on March 24 on its website migrants-refugees.va. It also released a companion 20-page booklet providing "good practices undertaken by Catholic organizations and religious congregations" around the world to offer effective examples of putting the pastoral guidelines into practice.

Pope Francis wrote in the preface, that "in times of greatest crisis, like the pandemic and the wars that we are currently experiencing, closed-minded and aggressive nationalism and radical individualism fracture or divide our unity, both in the world and within the church."

"The highest price is paid by those who end up getting labeled as 'them' versus 'us': foreigners, migrants and the marginalized who inhabit the existential peripheries," he wrote.

Jesus says that "every encounter with a refugee or migrant is an opportunity to encounter him," he wrote, and "his Holy Spirit makes us capable of embracing everyone, cultivating communion in diversity and harmonizing differences without ever imposing a depersonalized uniformity."

Catholic communities are invited to experience the joy of encounter, and the guidelines propose various ways they can implement Pope Francis' idea of "an ever wider 'we,'" which refers both to the entire human family and to the church.

The guidelines said, "Newcomers challenge us to rethink the parish: not modeled on a village where everybody knows each other and newcomers are seen as a new addition from outside, but toward a church on the move, always open to welcome others."

The pastoral guidelines list several challenges communities may be facing and they offer "concrete suggestions and guidance for action which can be articulated by four verbs: welcome, protect, promote and integrate."

"It is not a case of implementing welfare programs from the top down, but rather of undertaking a journey together" to build communities and nations that can preserve their respective cultural and religious identity, and "are open to differences and know how to promote them in the spirit of human fraternity," it said, quoting Pope Francis.

"Growing in freedom from all fear, particularly fears based on misguided perceptions," it said, "Catholic communities are called to build bridges with newcomers, promoting a real 'culture of encounter.'"

"We sincerely hope that this booklet helps its readers to truly become builders of bridges, drawn to deepen their awareness, through experience, of the richness that the presence of migrants and refugees bring into our communities," it added.

Three of the 20 examples in the booklet of "Good Practices about Intercultural Migrant Ministry" were US-based initiatives:

-- The Encuentro Project based in El Paso, Texas, which provides a faith-based, multifaceted immersion program in the El Paso-Ciudad Juárez border region to give participants a deeper understanding of the complex migration reality and of the community.

-- Vermont's Migrant Outreach Team made up of members of St. Peter Church in Vergennes and St. Ambrose Church in Bristol -- both served by Father Yvon Royer as pastor. The initiative was started in response to the Burlington diocesan synod's call for parishes to be more involved in evangelization through concrete service to local migrant workers.

-- The Archdiocese of Chicago's parish-based Pastoral Migratoria, which uses Catholic social teaching to train immigrants to support people in their own parishes. The USCCB also recognized it as a best practice for immigrant leadership development and missionary discipleship.