Sister Lucy Kalappura says she will continue to live in her convent. (Photo supplied)

The Vatican’s supreme tribunal has rejected the appeal of Indian nun Lucy Kalappura against dismissal, leaving her with no other option than to move out of her congregation.

Kalappura, however, told UCA News on June 14 that she will continue to live in her convent until an Indian court settles the case about her right to housing.

The nun has challenged her congregation’s order to move out of her convent, where she lived for more than three decades.

The tussle began after Kalappura’s Franciscan Clarist Congregation based in southern India's Kerala state dismissed her on Aug. 5, 2019, for alleged charges of disobedience and breaking religious vows.

The congregation, however, followed church laws to give her an opportunity to appeal to the Vatican and continue in the convent.

The nun appealed against the congregation’s dismissal order before the Vatican's Congregation for Oriental Churches, which rejected her appeal on Oct. 11, 2019.

But she refused to move out of the convent and within a fortnight appealed to the Supreme Tribunal, the Vatican's highest appeal court, against her dismissal.

The appeal now stands rejected and the Vatican has confirmed her dismissal, said Sister Ann Joseph, the congregation’s superior general, in a June 12 letter.

Informing the congregation of the rejection of Kalappura’s second appeal, the nun said: “Let us raise our hearts praising the Almighty for his unspeakable gift.”

But the nun is unfazed. “I will continue to live in the convent until the court settles my case,” she told UCA News on June 14. 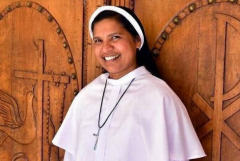 Kalappura currently lives in her congregation’s convent in Wayanad district in Mananthavady Diocese of Kerala.

Earlier Kalappura said her convent began to act against her after she backed the public protests of five nuns in September 2018 seeking the arrest of Bishop Franco Mulakkal, who was accused of raping the former superior general of Missionaries of Jesus, a diocesan congregation under him.

The congregation, however, claims that the nun's case has no links with the bishop's case.

For the past several years, the nun has been defiantly disobeying her superiors and the rules of the congregation, neglecting warnings and opportunities to correct herself, it said.

The dismissal came after several written warnings, her superiors maintain, quoting documents in their support