Müller insists he is not the pope's 'conservative opponent' 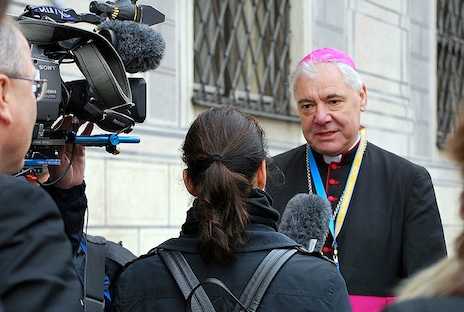 Just a few days before the Consistory that will create him cardinal and after months of controversies in the media over his seemingly rigid stance on pastoral care for remarried divorced persons, an issue which will be discussed at the next Synod, the Prefect of the Congregation, Gerhard Müller, was eager to stress that he is on good terms with Francis. “I am not his conservative opponent,” he said in an interview published by German Catholic news agency Kathpress.

The German prelate whom the Pope appointed leader of the dicastery in charge of Church doctrine, is not happy about being presented as an internal opponent of Francis’ pontificate. Müller accepts there are differences in terms of formation and approach but “these complement each other, they are not contradictory.” The new cardinal stated that Francis’ magisterium and speeches cover the “entire Catholic faith.”

The Prefect of the Congregation for the Doctrine of the Faith meets the Pope two or three times a month and the two communicate in Italian or Spanish (Müller speaks Spanish well having spend quite a bit of time in Latin America).

As far as women’s role in the Church is concerned, Müller said they could be given some high-ranking positions in the Vatican: not in the Congregations but in the Pontifical Councils, for example the Pontifical Council on the Family (which is led by Bishop Vincenzo Paglia) or for Health Care Workers. The Prefect clarified, however, that as it is ordained ministers that hold jurisdictional power, neither lay people nor women can become heads of Congregations, that is, the dicasteries that have the jurisdictional power to act on the Pope’s behalf. Other areas in which women could play a greater role are theological research and Caritas, although Müller is against the introduction of set quotas of women.

What Müller had to say about the Society of St. Pius X was also importance given that reconciliation is still a possibility: “The door is open,” he said during the interview, recalling the famous “doctrinal preamble” sent to the Lefebvrians in 2012.

Finally, Müller remarked on the spirit of collegiality, not authoritarianism that exists in his dicastery. Although the Pope must give his final approval, decisions are taken collectively. The Prefect recalled that in his address to participants of the plenary meeting of the Congregation for the Doctrine of the Faith on 31 January, Francis praised the dicastery for its practices of collegiality.