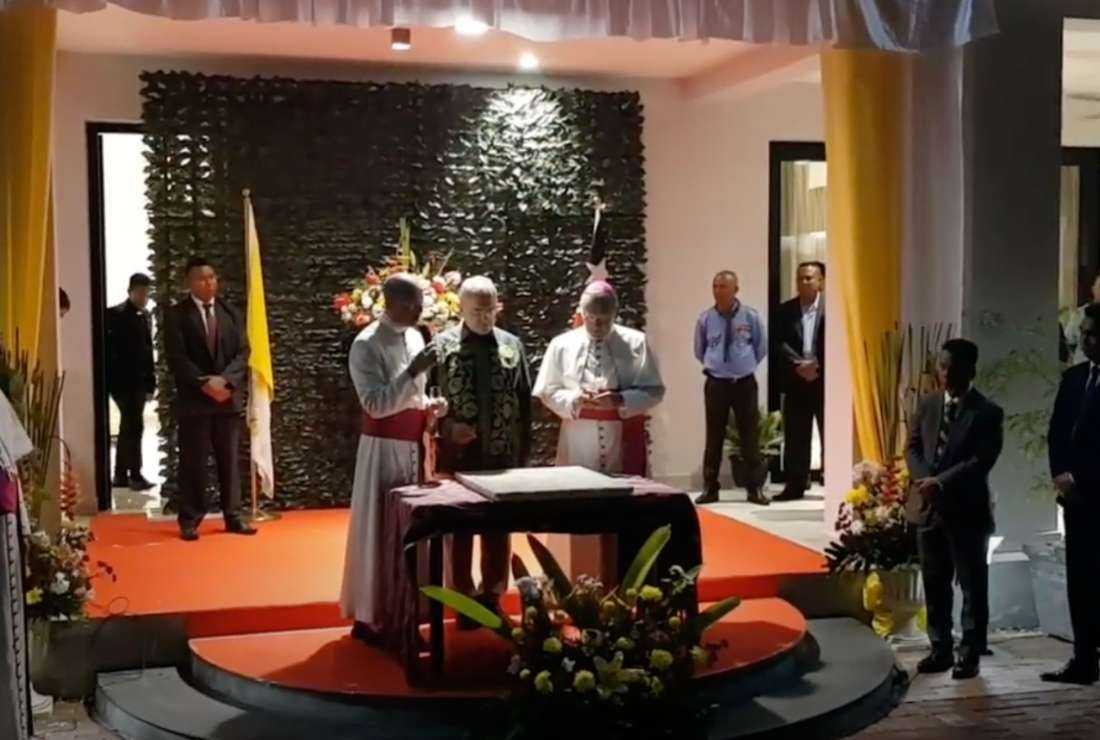 The inauguration ceremony of the new Vatican embassy in Timor-Leste on Sept. 20.

The Vatican has opened a new embassy in Timor-Leste capital Dili in an effort to strengthen ties with the Catholic-majority tiny Southeast Asian nation.

Archbishop Pena Parra said the new embassy is a “spiritual gift” from Pope Francis to the nation.

The nunciature is “another concrete sign of solicitude, care, and love that the supreme pontiffs have always demonstrated for the people of this noble island nation Timor-Leste,” the Venezuelan prelate said during the inauguration ceremony.

He left a message of “cordial greetings and spiritual closeness from Pope Francis.”

The Pope's new home in Timor-Leste, which is a green building, he said, reflects the "excellent bilateral relationship between Timor-Leste and the Holy See" which has lasted for 20 years along with the age of restoration of independence.

He also stated that he hoped the nunciature would be a source of encouragement for the Church in Timor-Leste to continue working to serve marginalized groups.

“It serves as a source of encouragement and renewal for the Catholic faith and for people of goodwill, to continue to serve the poorest and most vulnerable in this land”, he said.

He asserted that the Catholic faith has been important for national identity in the nation, in the past and present, and added that the faith has served “as a source of strength and comfort to people through good times and bad” for over its 500 years history of evangelization.

President Ramos-Horta said he expects the new embassy to open the door for the appointment of the first resident nuncio in the country.

Currently, the Vatican has a charge d’affaires based in Dili. Nuncios based in Indonesia or Malaysia have been overseeing Timor-Leste since the nation gained independence from Indonesia and established formal diplomatic ties with the Vatican.

Dignitaries from the church, state, and diplomats along with priests and nuns attended the inauguration program including Cardinal Virgilio Cardinal do Carmo da Silva of Dili.

Father Angelo Salshina, an official from Dili Archdiocese, said the Catholic Church hopes that the Vatican will be able to have a nuncio in the country.

“I think the way will be wide open for that. Previously, the embassy office in Timor-Leste had only rented the building of a religious order. With that permanent office, I hope it will happen that the Vatican also has a permanent representative here," he told UCA News.

"Of course, with this permanent representative, the Vatican will be able to take an increasingly important role in this country to work with the local Church to pay attention to the poor and marginalized groups," said Fr. Salshina, chairman of social services division of Dili Archdiocese.

Hiron Goncalves, a student at the National Timor-Leste University based in Dili, said she expects that the improved relations with the Vatican could also be an impetus for the local Church of Timor-Leste to be more concerned with social issues.

“This good relationship must bear fruit. One of them is how the local Church in Timor-Leste translates the mandate of the universal Church to be more concerned with the problems experienced by this country, which is still in the stage of strengthening itself after independence,” said Goncalves, who is actively involved in church activities.

“Given that this is a Catholic majority country, I imagine that this country can develop far in the future. That task, of course, rests with the government, but also with the Catholic Church,” she said.

Timor-Leste has a population of 1.3 million, of which 97 percent are Catholic.

A Portuguese colony from the sixteenth century to 1975, Timor-Leste was occupied by Indonesia until 1999. Following a bloodletting war of independence, it became a sovereign state thanks to the UN intervention.

Though rich in mineral resources, Timor-Leste is considered one of the poorest countries in the world. According to UNDP, about 42% of the population live below the national poverty line.