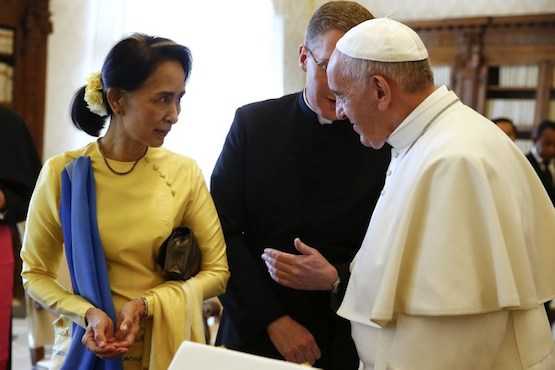 Myanmar's State Counsellor and Foreign Minister Aung San Suu Kyi meets Pope Francis during a private audience on May 4 at the Vatican. (Photo by Tony Gentile/AFP)

Cardinal Charles Maung Bo of Yangon has lead a delegation of bishops to meet with the Myanmar's military chief Min Aung Hlaing to discuss the planned visit of Pope Francis and prospects of peace in the country.

The talks came as Vatican officials arrived in Myanmar's capital Naypyidaw on Aug. 22, joining church officials from the Catholic Bishops Conference of Myanmar to coordinate logistics and discuss security issues with the concerned authorities, according to church sources.

ucanews.com understands that officials from the Vatican will then head to the Bangladeshi capital of Dhaka to begin preparations there for the second leg of the pope's visit.

Bishops Felix Lian Khen Thang of Kalay, Philip Lasap Za Hawng of Lashio, Basilio Athai of Taunggyi and Raymond Saw Po Ray of Mawlamyine attended a meeting in Naypyidaw on Aug. 21 where Cardinal Bo shared details about the pope's Myanmar visit during an hour-long meeting, according to two priests.

However, Myanmar bishops that ucanews.com spoke to remained tight-lipped, saying only that both the Holy See and the government are still in discussions and to wait for an official announcement.

Meanwhile, a senior priest from the Media Committee for the Papal Visit to Bangladesh, told ucanews.com: "The pope will definitely visit Bangladesh this year, but until the Vatican officially makes the announcement, we cannot give details on dates and programs. We expect there will be an official announcement on the visit from the Vatican by the end this month."

According to sources within the church and government, Pope Francis, will fly to Myanmar on Nov. 27 and then to Bangladesh on Nov. 30 before heading back to the Vatican. In Bangladesh, he is expected to make a three-day visit, where it is probable he will make courtesy visits to President Abdul Hamid and Prime Minister Sheikh Hasina.

The pontiff is likely to celebrate Mass with thousands of Catholics in Dhaka, where he will ordain 16 deacons to the priesthood. During the trip, he will attend a gathering of political leaders, government officials, dignitaries, social and cultural activists as well as interfaith and interdenominational leaders. He is expected to address youths, clergy and religious and visit poor and destitute people including sick, the disable, refugees and drug addicts.

ucanews.com previously reported senior clergy sources saying that Pope Francis arrives in Myanmar on Nov. 27 for four nights. It is expected that he will first visit Naypyidaw where he will meet President Htin Kyaw and the country's de-facto leader, State Counselor and Foreign Affairs Minister Aung San Suu Kyi.

It is anticipated that he will celebrate at least two Masses before heading to the country's largest city and business capital Yangon for a large open air Mass. It is also likely that he will visit and celebrate Mass at St. Joseph's Catholic Major Seminary in Yangon.

In Myanmar, the Aug. 22 meeting was also the first such event held between the military and Catholic leaders in a Buddhist majority country where Christians are minority.

Cardinal Bo and Senior General Min Aung Hlaing discussed the importance of peace and how it can beneficially develop the country.

Cardinal Bo stressed non-violence conflict resolution and requested all stakeholders "come to the negotiation table" and solve the current problems by "peaceful means."

The cardinal raised his concerns about civilians affected by the country's civil wars.

"We conveyed a message about peace and we showed our religious leaders' commitment to seeking peace in the country," Archbishop Athai who attended the meeting told ucanews.com.

Civil wars continue to plague many ethnic-minority states in Myanmar, particularly in northern, mainly Christian, Kachin State. This conflict has spread into the northern part of neighboring Shan State. Since hostilities resumed in 2011, following a 17-year ceasefire, more than 120,000 people were forced to flee their homes and they remain in refugee camps.

Suu Kyi has pledged to end hostilities in the country yet peace remains elusive. The Nobel Laureate has been widely and increasingly criticized by democratic governments around the world for her hands-off attitude to the Rohingya crisis and her National League for Democracy's insistence on calling the group not by their self-determined name but as Bengalis.

The killing of nine police officers by Rohingya militants in northern Rakhine State last year resulted in a bloody crackdown by Myanmar's security forces after which more than 87,000 Rohingya fled to neighboring Bangladesh.

In February, Pope Francis prayed for the persecuted Rohingya from Myanmar.

"They are good people, they are not Christians, they are peaceful people, they are our brothers and sisters and for years they have been suffering, they are being tortured and killed, simply because they uphold their Muslim faith," the pope said during his weekly audience at the Vatican.