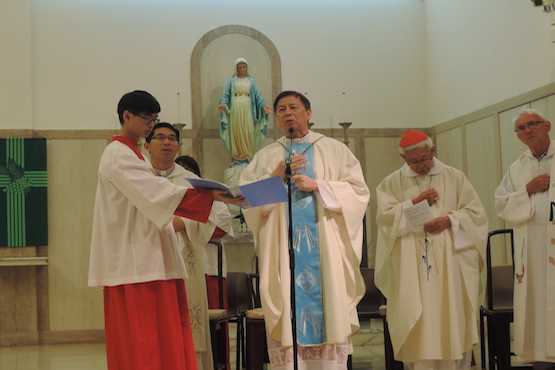 Archbishop Savio Hon Tai-fai, center, celebrates Mass at St Jude's Church in Hong Kong May 24 for the annual observance of the World Prayer Day for the Catholic Church in China. (ucanews.com photo)

A top Vatican official has for the first time attended the Hong Kong observance of the World Prayer Day for the Catholic Church in China.

Retired Cardinal Joseph Zen Ze-kiun of Hong Kong invited Archbishop Savio Hon Tai-fai to replace him as the main celebrant during Mass at St Jude's Church in Hong Kong May 24 to celebrate the special day of prayer.

Hong Kong-born Archbishop Savio Hon has served as secretary general of the Vatican's Congregation for the Evangelization of the Peoples since 2010.

Archbishop Hon was on an "unexpected two-day home visit" after attending the swearing in of the president and vice president of Taiwan.

This was the first time a top Vatican official attended the day of prayer in Hong Kong, church officials said.

"It is fortunate that Christians always rely on hope during unfortunate things that happen in life," the archbishop said in his homily, referring to the current situation of challenges the Catholic Church faces in China.

China is currently witnessing a decreasing trend in the number of those wanting to be priests and the government's cross-removal campaign in Zhejiang province where about 1700 church crosses were removed by authorities since 2013.

"The situation of the church in China is hard to be optimistic about due to pressures from the government and its policies that are a disadvantage to the church," said Anthony Lam Sui-ki, executive secretary of the Holy Spirit Study Centre, the Hong Kong diocesan institute that researches Catholic life in China.

Beijing also aims to tighten its management on religions in the name of "sinicization" following a national meeting in April on religious work and how to formulate stricter laws to control nongovernmental organizations.

"And there is the continuous decrease of the Catholic population. With each year, there are an estimated 170,000 Catholics who have died but only about 70,000 newly baptized," Lam said.

In his homily, Archbishop Hon mentioned the story of the Marian statute at the Sheshan shrine in Shanghai that was destroyed during the Cultural Revolution and his past encounters with Father Pedro Yu Heping, also known as Wei Heping, who was found dead under mysterious condition in November.

"We see hope in this darkness. … The more difficulties we encounter, the greater hope we have because Jesus is with us," said Archbishop Hon.

He encouraged Chinese Catholics "to be brave and walk the path of truth and charity" as Emeritus Pope Benedict XVI wrote in his 2008 prayer for the special day.

Pope Benedict XVI designated the day in his 2007 letter to Chinese Catholics, in which he mentioned the veneration of Our Lady Help of Christians at Sheshan for the church in China.