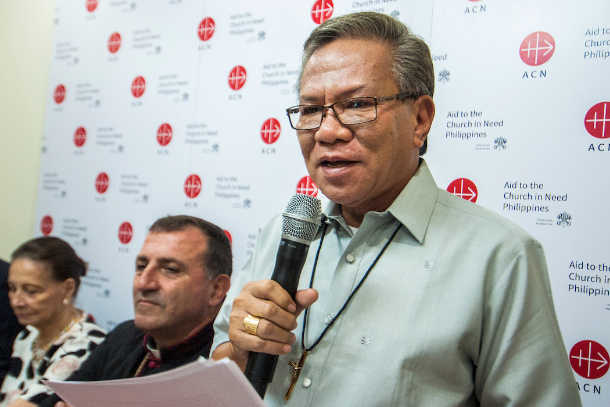 Bishop Angelito Lampon of the Vicariate of Jolo in the southern Philippine region of Mindanao. (Photo by Angie de Silva)

The Vatican has announced the appointment of Bishop Angelito Lampon, prelate of the Vicariate of Jolo in Sulu province, as the new archbishop of Cotabato, in the southern Philippines.

The announcement was made in Rome on Nov. 6 after Pope Francis accepted the resignation of Cardinal Orlando Quevedo of Cotabato.

Cardinal Quevedo, 79, submitted his resignation in 2014 upon reaching the canonical age of retirement, but the pope had not accepted it until this week.

Pope Francis appointed Bishop Quevedo a cardinal — the first from Mindanao — two months before he turned 75.

Like Cardinal Quevedo, Bishop Lampon, who was born in Cotabato province in 1950, belongs to the Oblates of Mary Immaculate congregation.

The new Cotabato archbishop studied philosophy at San Jose Major Seminary and theology at Loyola School of Theology in Manila.

Bishop Lampon was ordained a priest on March 26, 1977. He became provincial superior of his congregation in 1988 and became general counsellor in Rome in 1992.

He was appointed apostolic vicar of Jolo in 1997. In 2012, Pope Benedict XVI appointed him to the Rome-based Pontifical Council for Interreligious Dialogue.

Cardinal Quevedo, meanwhile, will leave the archdiocese with about 87 diocesan and religious priests, and more than a hundred nuns.

The eighth cardinal from the Philippines, the prelate was Pope Francis' special envoy to the 150th anniversary celebration of the "Hidden Christians of Japan" in March 2015.

The pontiff also sent Cardinal Quevedo to beatify 17 martyrs from Laos in December 2016.