Bishop Peter Shao Zhumin of Wenzhou has been detained by government officials for the fourth time. (Photo supplied)

The German ambassador to China has appealed to the government to free underground Bishop Peter Shao Zhumin of Wenzhou in eastern Zhejiang province.

The statement by Ambassador Michael Clauss was posted on the German embassy website June 20 after a church media organization outside China reported that Bishop Shao was still in detention. That news report said that the underground bishop was being coerced into joining the Chinese Catholic Patriotic Association (CCPA), an organization which is incompatible to Catholic doctrine for its independent advocacy.

Bishop Shao was taken away by government officials on May 18. He has been detained four times since the Vatican confirmed him as Bishop of Wenzhou last September, following the death of his predecessor Bishop Vincent Zhu Weifang.

"Bishop Shao has returned to Wenzhou but a report saying that he attended a seminar on religion is not true. He still remains detained in a hostel alone," a diocesan source who asked not to be named told ucanews.com.

The ambassador's statement has aroused displeasure among some Chinese Catholics who see the Holy See remaining silent on Bishop Shao's detention.

"Finally someone speaks out for the bishop but it is a pity that it is not the Vatican," said an underground priest who asked not to be named.

"Is it because the Vatican thinks it should not interfere in the domestic affairs of China?" he asked.

Clauss in his statement said he appreciated China's declared intention to achieve progress with regard to the Catholic Church but pointed to "setbacks in guaranteeing religious freedom."

One growing concern is the treatment of Bishop Shao, the ambassador said, adding that the detained bishop's "full freedom of movement should be restored."

In the same statement, the ambassador also spoke of his concern about several new rules in a draft regulation on religious affairs. "If unchanged, they could place further restrictions on the right to freedom of religion and belief," he said. 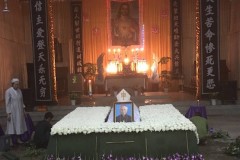 According to Hong Kong's pro-Beijing daily Wenweipo on Jan. 9, Wang Zuoan, director of the State Administration for Religious Affairs, reported that the newly amended Regulations on Religious Affairs would be released after receiving approval from the State Council's executive meeting.

Yet no release date has been given, but the State Administration for Religious Affairs has planned to promote the new regulations as soon as they are promulgated.

Observers believe that the amendments are to reinforce the Communist Party's control over religions, minorities and any potential sources of "social disruption."