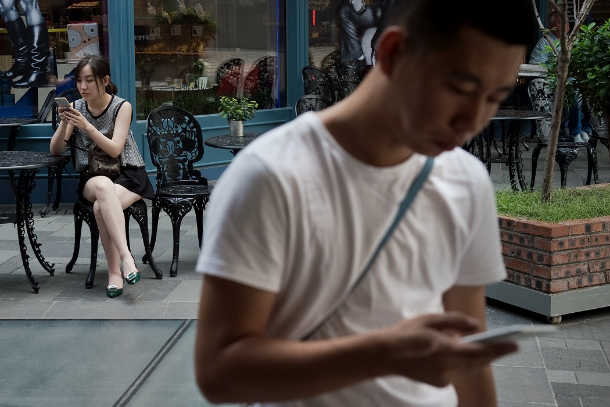 In this file picture people use their smartphones at a shopping complex in Beijing. Before signing a provisional Sino-Vatican agreement on the appointment of bishops, China's State Administration for Religious Affairs issued a formal draft to solicit public opinion on what measures the Administration of Internet Religious Information Services could prepare to adopt to monitor the activity of religious online. (Photo by Nicolas Asfouri/AFP)

Since the set of proposed measures were issued, the security and religious departments of the Chinese Communist Party (CCP) have been gathering responses from religious communities around the country to evaluate their feedback.

The party reportedly aims to establish a joint set of regulations by five state agencies that will very likely be passed into law later. Network administrators have described the regulations as an "all round strangulation" of religion to curb evangelization.

As formulating measures to regulate religiously themed network information services (NIS) lies beyond the jurisdiction of the SARA, the cyberspace agency and information technology ministry are required to assist.

By including the other two aforementioned ministries, the party is able to make this a matter of national security. In this situation, these two bodies effectively serve as the "enforcement agencies" of the SARA.

As such, what began as a political issue — the dissemination of religious information online — has now been elevated to a matter of national security, paving the way for a stricter crackdown with wider-ranging powers and more severe punishments.

According to the proposed measures, Article 9 stipulates that with the exception of religious organizations, academic institutions, and venues for religious activities, no reference to religions like Buddhism, Catholicism, Protestantism, Taoism or Islam will be permitted in the official titles of news-issuing website domains.

This is quite clearly an attempt to "eliminate" various religions from cyberspace by outlawing many of the key words and symbols associated with them, until finally there is nothing left.

It is even worse than what China's army of censors has been doing for years in helping to keep the so-called "Great Firewall" in place online by deleting any references to sensitive issues related to the likes of Tiananmen Square, Tibet and Taiwan among others.

It is also worse than the restrictions the party has placed so far on social media vis-à-vis the promulgation of religion by making certain words, phrases or ideas "taboo." In April of this year the party also banned sales of the Bible online.

However, the ridiculous logic at play in trying to introduce Article 9 soon becomes apparent if we compare it to another proposal found in Article 5 of the same draft set of regulations.

This states that, "the administration of religious information services on the internet is based on the principles of protecting what is legal, prohibiting what is unlawful, suppressing extremism, resisting infiltration, and fighting crime."

Yet the most unacceptable provision is Article 18. This states that "no organization or individual can use text, pictures, audio or other visual material to broadcast live or show taped broadcasts of [people] worshipping the Buddha or burning incense, lay believers receiving Buddhist precepts, chanting, worshipping, giving Mass, providing baptisms or other religious activities."

This is a serious violation of the Chinese people's freedom of speech and freedom of religion as it is so all encompassing.

To cut through all the fog, what this means is that any information related to religion, regardless of form, cannot be published online without fear of punishment.

Article 18 would also directly overrule Article 9, meaning that religious organizations would enjoy the kind of exemptions the earlier article implies.

In seeking public opinion before the government "lays down the law," the SARA is basically getting a picture of exactly who and where the biggest threats to its latest crackdown are.

Surely, any feedback that opposes the draft regulations will be noted and those parties subject to greater scrutiny in future as they join a long list of perceived threats to the will of the party.

It is highly doubtful their "feedback" will make one iota of difference as Chinese media have made it abundantly clear that this is the will of President Xi Jinping, the most powerful Chinese leader since Chairman Mao Zedong.

There can be no tolerance of dissenting voices when the orders come from the very top of the Chinese power structure hierarchy, a point neatly encapsulated in The Economist's famous headline for its 2014 essay on the political backstory of the incumbent Chinese leader: "Xi Who Must Be Obeyed."

Xi raised the issue of how to manage religious content online in April 2016, two years after that article was published, at the National Conference of Religious Work.

He also sanctioned additional provisions to the law in the newly-revised Regulations on Religious Affairs.

As such, we can safely say the latest set of proposals will almost certainly be passed into law regardless of whatever feedback society gives the party. This so-called "consultation" with the public and religious organizations is nothing but a farce. It is procedural in nature. The real results (people's opinions) will never see the light of day. This is how the party operates.

All religions are being suppressed in China now. These measures are just the latest escalation of a crackdown that has been going on for years, but which has reached new heights this year, with churches being demolished and more prohibitions being put in place, including orders that the Chinese flag and national anthem be hoisted and sung, respectively, at various religious venues.

Both the government and its official media mouthpieces are focused on promoting the ideology of the party, which is officially atheist, and they will not deviate from this position nor tolerate any threats to it.

Meanwhile, after decades of wrangling over who gets to choose which prelates will get to officially represent China, the Vatican and Beijing signed a provisional agreement on Sept. 22 concerning the appointment of bishops.

Many pundits (including the Vatican itself) saw this as an important milestone as it marked the party's first formal recognition of the pope's authority within the church. But it also worked the other way round.

According to the terms of the deal, Pope Francis officially recognized seven bishops appointed by the party — figures the church had previously excommunicated as they had not received the blessing of the Holy See.

Yet this was also seen as setting a worrying precedent by ceding more power to the party and potentially paving the way for the Vatican to later be coerced into cutting ties with Taiwan.

But the latest set of cyber measures throws the validity of these moves by Beijing to ostensibly "mend fences" with Rome into doubt, as it is clear that the party is bent on suppressing religion even more and even attempting to eradicate it altogether from both the online and offline world within its borders.

To me, as to many others, this whole charade seems quite ridiculous.

In signing the agreement — and even more so if the provisional deal is made permanent — the Vatican has broken a multitude of hearts.

It has let down those who have fought so courageously against the establishment in China to freely practice their religion, and made tens if not hundreds of thousands of Catholics lose trust in the Holy See.

We could use the metaphor of children who are just hoping for a warm cuddle from their kind father, but instead receive the back of his hand or bootstrap — the Devil's hand of tyranny.

At this moment, at this darkest hour, believers of various faiths must stand firm and dare to challenge the hegemony of the party in laying down these tyrannical laws intent on squashing religion in China.

Just as, if not more, importantly, the Vatican must make no more concessions to the party; rather, it must pressure Beijing to start righting its wrongs and return to the people of China the basic human rights that not only they but people all over the world are entitled to.

This is not so much a choice as something the Vatican is morally bound to consider and carry out. There can be no religious compromise in the face of tyranny.