Underground bishops told to cede their positions to state-approved clerics 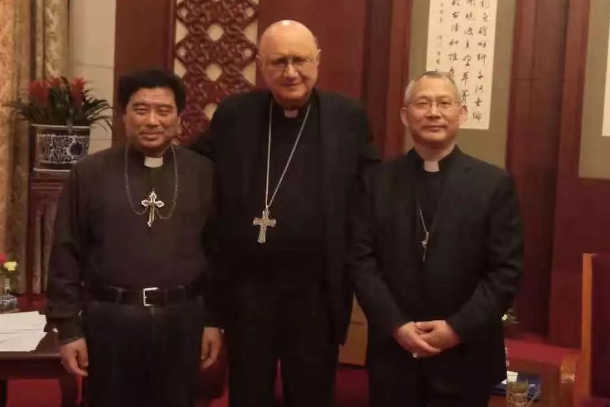 A Vatican delegation has travelled to China to oversee the placement of formerly illicit bishops into dioceses that had been run by underground bishops.

The arrangements were made between a Vatican delegation led by Archbishop Claudio Maria Celli and seven former illicit bishops from the Chinese Patriotic Catholic Association and two underground bishops from Mindong and Shantou dioceses of eastern China respectively at a Beijing meeting on Dec. 10.

Bishop Zhan Silu told ucanews.com that he and six other former illicit bishops would become bishops of their respective dioceses.

According to China's state-run Global Times on Dec. 14, Bishop Guo Xijin of the underground church community of Mindong, in Fujian province, promised to take up a post as an auxiliary bishop. He would stand aside for Bishop Zhan who will become the diocesan bishop.

The underground and government-sanctioned churches in Mindong would merge following the handover, Bishop Zhan was quoted as saying in the news report.

Asked how well the underground church would accept the change, Bishop Guo replied, "There is nothing to worry about, as this is the will of God."

However, he had not yet been informed about how and when the handover would happen, and whether he would be issued a 'bishop's license' by the Chinese government, according to the report.

Bishop Guo said in the interview, "My main duty now is still pastoral work, but I will discuss with Bishop Zhan about the management of the diocese."

A Mindong priest named 'Father Cha' posted an item on his WeChat social media account saying that Bishop Guo called a meeting with the Presbyterial Council (or Council of Priests) on the night he returned from Beijing.

The post said that, in a letter signed by Cardinal Pietro Parolin, the Vatican's secretary of state, and Cardinal Fernando Filoni, the prefect of the Congregation for the Evangelization of Peoples, the Holy See expressed its appreciation regarding Bishop Guo.

Archbishop Celli said underground Bishop Peter Zhuang Jianjian of Shantou would step down for Bishop Joseph Huang Bingzhang who like Bishop Zhan was previously excommunicated but was recognized by the Vatican after the provisional agreement on the appointment of bishops was reached with Beijing in September.

However, Bishop Zhuang stated when contacted by phone, without elaboration: "I have not retired."

Bishop Zhuang told ucanews.com on Dec. 17, he previously visited Beijing and that Archbishop Celli asked him to retire, but he had not replied.

A source from Shantou, who wanted to be anonymous, told ucanews.com the Chinese government had asked the underground bishops to be "obedient" in relation to official directives.