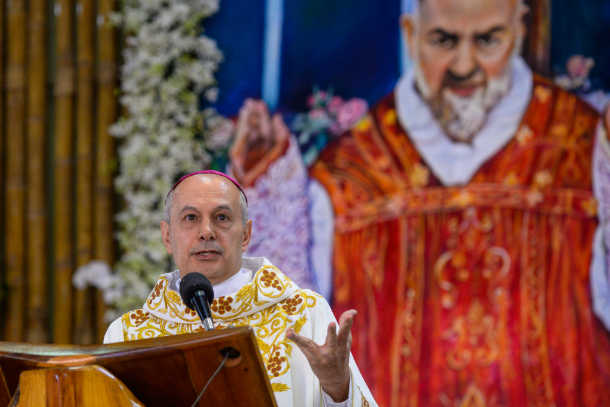 Archbishop Gabriele Caccia, papal nuncio to the Philippines, speak before devotees of St. Padre Pio in the province of Batangas on Oct. 6. (Photo by Maria Tan)

The papal nuncio to the Philippines has appealed to Filipinos to pray for Pope Francis as he faces a "difficult time" in the midst of reports of scandals that threaten the Catholic Church.

Archbishop Gabriele Caccia told a gathering of devotees of St. Padre Pio in the province of Batangas that the pope needs prayers to continue the mission of the church.

"There are many issues where we need to have the helping hand of God, the Holy Spirit," said the archbishop.

"The pope asked for prayers because there are many challenges in the period of our time," added Archbishop Caccia.

"Please remember to pray for him, especially in this difficult time," he said during a Mass marking the visit of Padre Pio's heart relic in the Philippines this month.

The prelate said the church is facing problems that include issues affecting the family, environment, peace, migrants, and refugees.

"The pope spoke about purification inside the church also. There are some scandals that don't help in going on with confidence," said Archbishop Caccia.

Pope Francis earlier called on Catholics to pray the rosary every day during the month of October to protect the church from what he described as "attacks by the devil."

In what could be his harshest criticism of abortion, the pope this week compared the procedure to "hiring a hitman to resolve a problem."

Archbishop Caccia said the pope wants prayers for the church to become more aware of its "guilt, errors and abuses [and] to prevent evil from prevailing."