Pope Francis holds an audience to deliver his Christmas greetings to Vatican employees on Dec. 21, 2020, at the Paul VI Hall in the Vatican. (Photo: AFP)

The Vatican has updated its rules to stem the spread of Covid-19 and will require all its employees to be vaccinated against the virus or prove they have recently recovered from the disease.

Also, starting Jan. 10, non-essential work-related travel is temporarily suspended, masking outdoors is required, high-filtering FFP2 masks must be worn indoors and quarantine rules for those who have had contact with a positive case are adjusted with no isolation required for those who are fully and recently vaccinated, including with the booster.

The Vatican made the announcement Jan. 12.

Mirroring restrictions recently put into place by Italy, the Vatican will now require the "super green pass" for: all employees, interns and external collaborators; visitors to the Vatican Museums, gardens and the apostolic palace in Castel Gandolfo; people taking part in conferences, seminars and other events, which also will have a reduced capacity of 35 percent; and individuals wishing to eat inside, such as in a Vatican cafeteria.

The Vatican will evaluate on a case-by-case basis those requesting an exemption from the current rules, it said.

Employees of the Vatican City State governor's office who do not have the new "super green pass" will not be allowed to access their place of employment and will be considered "absent without leave," so not paid for missed days. Stiffer sanctions may follow a prolonged "unjustified absence," it added.

The "super green pass," whose scope was also expanded in Italy, is a stricter version of the regular "green pass," which certified the holder had been vaccinated, tested negative or recently recovered from Covid-19. The "super" pass is given only to people who have been vaccinated or recently recovered from the disease, thereby essentially placing even more restrictions on those who are unvaccinated without medical reason.

The Vatican said the new rules were put in place in response to "the progressive worsening of the health emergency."

Four more regions, including Rome's Lazio region, were just designated low- to moderate-risk "yellow zones" because of rising infection rates. As of Jan. 3, 11 out of Italy's 20 regions have been declared "yellow" under Italy's four-tiered system of restrictions. Masking outdoors has already been mandatory throughout Italy. Covid is causing a 'parallel pandemic' for children, Vatican says 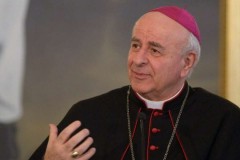