Calls for moment of silence during major global event 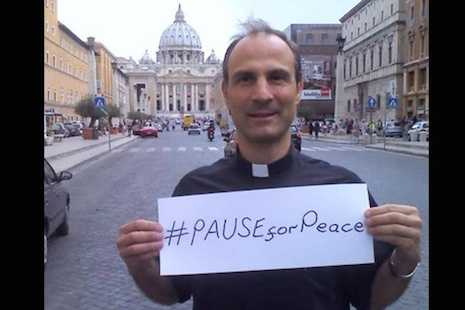 The Pontifical Council for Culture launched an effort designed to unite the world in asking for peace in warring countries by observing a moment of silence during the final game of the World Cup.

“Sports were born around religious festivities. Sporting events were moments of peace when wars ceased, as for the Olympic truce,” Msgr. Melchor Sanchez de Toca y Alameda said July 10 for the launch of the campaign.

“Why not for the World Cup? Why not a pause, a moment of silence, a truce for peace?”

Msgr. Sanchez, undersecretary at the Pontifical Council for Culture and head of the section for culture and sport, spoke in reference to the ancient Greek tradition “ekecheiria,” or “truce”, that was put into practice during wartimes in order to allow citizens safe travel to the Olympic Games.

Established in the 9th century B.C. as a treaty signed by three kings, the truce allowed for athletes, artists, their families, and ordinary pilgrims to travel in complete safety to participate in or attend the games, as well as a safe return to their home countries.

The campaign, launched on the council’s website and Facebook page, is simply “a call for peace,” said Richard Rouse, a member of the Pontifical Council for Culture.

“It's as simple as it says. It's just that one simple phrase – we live in an age of simplicity, we don't need big, long speeches to get the point across. We just want peace, simple as that,” Rouse told CNA July 10.

Rouse said because much of the world will be watching the final game "we just thought it would be a good opportunity to take a moment, 30 seconds, a minute, to remember all those who are suffering in the wars around us.”

That pause, he said, “could be a moment at the beginning of the game, in the middle or whenever.”

“We'll leave that up to the organizers to decide, but to take a moment to ask for peace in the middle of so many conflicts.”

The World Cup final match will be played July 13 between Germany and Argentina.

In addition to being shared on Facebook, the pontifical council is also promoting the initiative on Twitter with the hashtag #PAUSEforPeace.