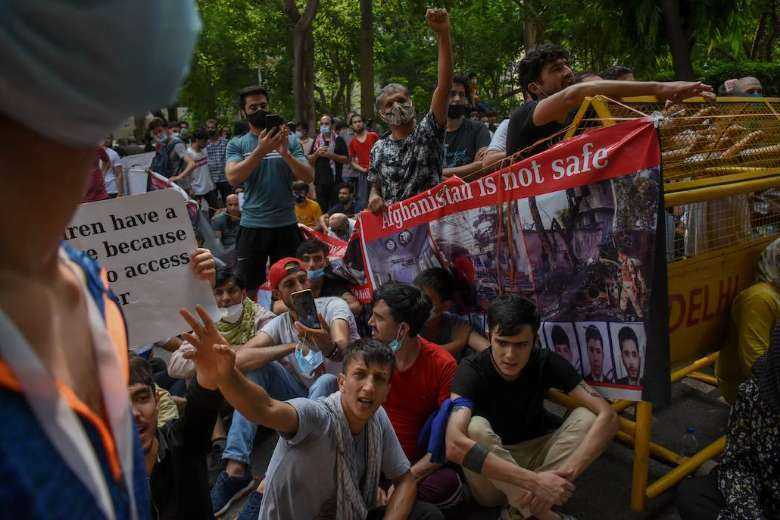 Afghan refugees living in Delhi protest outside UNHCR India on Aug. 22 after the Taliban takeover in Afghanistan. (Photo: AFP)

An Italian newspaper has claimed that Pope Francis is negotiating with the Taliban in Afghanistan through Turkey’s President Recep Tayyip Erdogan to defuse the refugee crisis in the Central Asian country.

According to Il Tempo, the aim is to open humanitarian corridors to help thousands of Afghan refugees following the withdrawal of US troops and the return to power of the Sharia-following Taliban.

“A reserved channel has unexpectedly been opened between the Holy See and the Taliban to create a humanitarian corridor,” stated the newspaper.

In the front-page report, the newspaper said the Vatican is holding a three-way negotiation between the Congregation for Eastern Churches, Erdogan and the Taliban regime.

The report went on to claim that the move involving the Congregation for the Eastern Churches has made a breakthrough in opening a dialogue, with Erdogan as an intermediary.

So far, there has been no official confirmation or denial from the Holy See press office regarding the report.

According to the newspaper, the Vatican has better reach than the European Union and North Atlantic Treaty Organization (NATO) to bring the Taliban to the negotiation table and strike a deal on the refugee crisis.

Pope Francis enjoys cordial ties with most Muslim countries. He has made it a point to involve both Muslim factions — Shia and Sunni — and give them equal importance in his papal diplomacy.

The pope has wide acceptance in Asia as he has made several trips to the region.

By pressing into service the Eastern Churches, which are in communion with Rome, the pope is trying to bypass the conservative Taliban criticism of Western moves.

The Vatican does not have diplomatic ties with Afghanistan, where Muslims form 99 percent of its some 38 million people.

However, the Holy See in 2002 set up Missio Sui Iuris, an Italian mission, in Afghanistan. The mission, headed by Italian Barnabite fathers, spearheaded charity and humanitarian activities.

Among other things, it set up schools and conducted activities in the western regions of the landlocked country.

The Church is also engaged in setting up humanitarian corridors from Lebanon and Libya, two war-torn countries.