A Vatican-appointed investigator has completed a probe into allegations leveled against an Indonesian bishop by rebel priests within his own diocese.

Holy Cross Bishop Antonius Subianto Bunjamin of Bandung was appointed by the Vatican as its apostolic visitator last month to look into allegations that Bishop Hubertus Leteng of Ruteng misappropriated church funds and kept a mistress.

Bishop Bunjamin told ucanews.com on Aug. 24 that he had collected enough evidence during an Aug.-15-18 visit to Flores Island, during which he interviewed about 30 priests and laypeople, and would be sending a detailed report to the Vatican.

"Hopefully the report will be completed no later than early September," he said.

The bishop said he cannot be sure when the Vatican would make a decision.

Priests in Ruteng Diocese who made the allegations said Bishop Leteng's alleged actions had deeply wounded the church and that they were confident the Vatican would eventually make the right decision.

"I believe the apostolic visitator has done his best in treating this wound," said Father Laurensius Sopang, rector of the St. John Paul II Minor Seminary in Labuan Bajo.

"I also believe it is God's own intervention to repair His injured church," he said.

The scandal erupted in June when 69 priests — including Father Sopang — quit their posts and demanded Bishop Leteng change how the diocese was run.

They accused Bishop Leteng of secretly borrowing US$94,000 from the Indonesian bishops' conference and US$30,000 from the diocese without providing an accountability report. 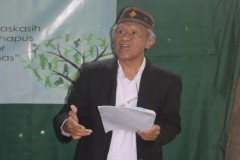 The 58-year-old bishop is reported as saying at a meeting that the money was used for the education of a youth from a poor family who was studying to be a pilot in the United States, but refused to give details about the youth.

However, the priests suspect the money went to a woman who they allege the bishop was having an affair with. The alleged affair surfaced in 2014 after a priest who chose to leave the priesthood went public with the allegation.

Onesimus Jaman, a lay leader interviewed by the apostolic visitator, said he was optimistic the investigation would produce the right outcome.

"Talking to Bishop Bunjamin, I found him honest and felt he was sincere in trying to resolve this problem," he said.

"The situation is critical and there are many things that must be addressed in the diocese, but for now the main thing is renewal at the top of the diocese," he said.

Sirilus Belen, another layleader who met Bishop Bunjamin in Jakarta said he was "sure the Vatican is not messing around regarding this problem."

"That confidence was confirmed after meeting the apostolic visitator," he said.