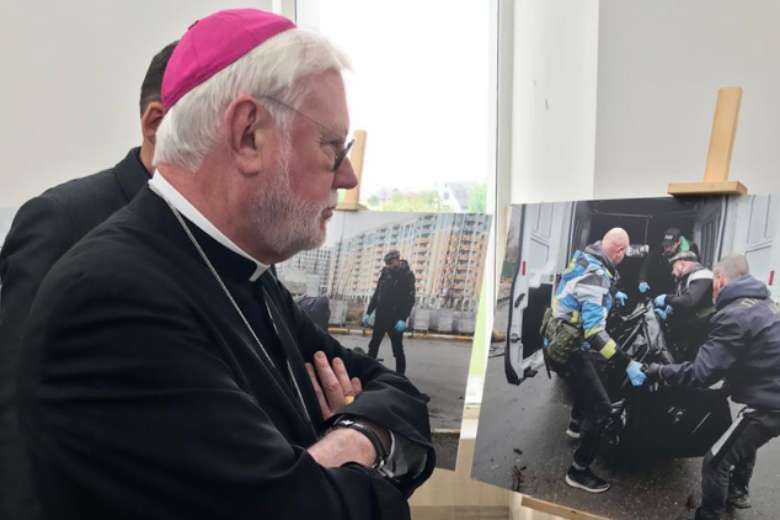 Archbishop Gallagher before the photographs of the Bucha massacre in the crypt of the Orthodox Church of St. Andrew. (Photo: vaticannews)

Seeing scenes of a war on television is one thing, "touching this reality is another," Archbishop Paul R. Gallagher, Vatican foreign minister, said in Ukraine.

"I want to show support and solidarity, also in the name of the Holy Father," the archbishop told Vatican Media while in Lviv.

During his May 18-20 visit to Lviv, Kyiv and surrounding suburbs, Archbishop Gallagher met with bishops from the Latin- and Eastern-rite Catholic churches as well as with local and national government officials.

Before meeting May 20 in Kyiv with Dmytro Kuleba, Ukraine's foreign minister, he visited Resurrection Cathedral with Archbishop Sviatoslav Shevchuk of Kyiv-Halych, head of the Ukrainian Catholic Church, and went to the nearby towns of Vorzel, Irpin and Bucha, where he prayed at the site of a former mass grave. Russian soldiers who occupied the town in March have been accused of committing war crimes there.

"Heavenly Father, in your mercy we ask you to grant peace to all those who for some time were buried in this place," he prayed. "We call upon you to change hearts, convert hearts, so that horrors like this may be always avoided and that the hearts of men may turn toward you and turn to each other in a spirit of understanding, a spirit of wishing to consolidate peace in this land of Ukraine and throughout the world."

"This is heartbreaking," he told Vatican Media. "It is a horror because these things were done by men to other men, and done gratuitously, done to civilians, done in a completely barbaric way. And that really is a horror. We are witnesses of this, the suffering and the martyrdom of this country."

At a news conference with Kuleba, Archbishop Gallagher said his visit was meant to demonstrate the closeness of the pope and the Vatican to the Ukrainian people, "particularly in light of Russia's aggression."

Pope Francis and his closest collaborators "suffer greatly for the many deaths, violence of all sorts, the devastation of cities and infrastructure, the separation of so many families and the millions of displaced people and refugees," the archbishop said in his introductory remarks, which were shared by the Vatican press office.

The ongoing conflict makes everyone sadly aware of their limited ability to find "immediate ways to end this senseless conflict," he said. "Faith in God and in humanity, however, compels us to persevere in the pursuit of peace through prayer, words and deeds and not to succumb easily to the enormous challenges."

The visit, he said, allowed him "to touch the wounds of the Ukrainian people and hear their passionate plea for peace."

Archbishop Gallagher thanked the government, the Catholic churches and their Caritas organizations and Ukraine's other churches and religions for their "commitment to peace and solidarity" and he said he prayed "the combined efforts of the entire world will soon put an end to destruction and death."

With Maksym Kozytsky, governor of the Lviv region, on May 18 the archbishop visited internally displaced people who have been offered shelter at the Church of St. John Paul II in the village of Sokilnyky, outside Lviv.

Since the Russian invasion of Ukraine in late February, the parish has hosted more than 1,500 seeking safety from the fighting.

When the archbishop visited, 120 displaced people were living there. They greeted him holding signs with the names of the cities they left to show how many villages, towns and cities have been impacted by Russia's attacks.

"I want to express our solidarity with the people of Ukraine," the archbishop told them. "The Holy Father sends you his blessing. He is very well aware of what is happening in your country. He knows that you are a strong and united people."

Amid continuing calls by many Ukrainians for Pope Francis to clearly denounce Russia and President Vladimir Putin by name, Vatican Media reported that Archbishop Gallagher told the civil leaders in Lviv: "The pope has a universal mission. He has to take into consideration all peoples at all times and seek their good."

However, he said, the pope is "trying to be as forceful as he can to defend the Ukrainian people, to point out the fact that they have their freedom, that the integrity of this country has been transgressed."

"The Holy See remains completely committed to the territorial integrity of Ukraine. That is our bottom line," he said.

In an interview with Vatican Media May 19, the archbishop said Pope Francis and the Vatican are willing to do anything they can to promote an end to the war.

"The Holy See continues its diplomatic activity with contacts with the Ukrainian authorities and also, through the embassy of Russia to the Holy See, we have some contact with Moscow," he said.

The Vatican also continues to encourage people and organizations to send humanitarian aid and to remind the international community that people continue to suffer in Ukraine.

"Unfortunately, in every conflict -- we have seen it also in Syria or in Lebanon with the many problems it has had -- after a while fatigue takes over even in supporting a people in distress," he said. So, the pope is continuing his initiatives, his moments of prayer and his public appeals for peace.

Visiting Catholic parishes and monasteries hosting displaced people and hearing about all the assistance Caritas is providing to victims of the war, the archbishop said, shows how the Catholic Church in Ukraine "identifies completely with its people and seeks to respond to their needs and to help not only Catholics but also members of other religions."

Meeting the people, he said, "I see their tension and insecurity because they do not know what will happen in the future."