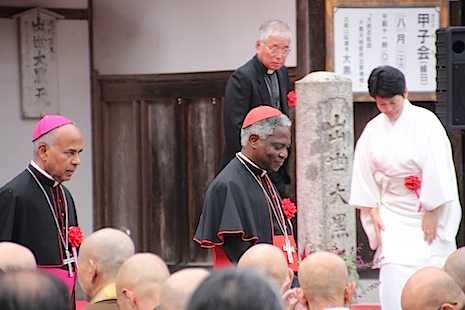 Cardinal Peter Kodwo Appiah Turkson at an interfaith gathering at the Enryakuji Temple on Mount Hiei, a Buddhist holy sit outside Kyoto

A top Vatican official reaffirmed the Catholic Church's repudiation of atomic weapons during a visit to Japan for the 68th anniversaries last week of the bombing of Hiroshima and Nagasaki at the end of the Second World War.

Cardinal Peter Kodwo Appiah Turkson, president of the Vatican’s Pontifical Council for Justice and Peace, was in Japan from August 5-9 to take part in the “Ten Days for Peace” initiative organized every year by all the Catholic dioceses in Japan.

He took the opportunity to not only pray for victims of the atomic bombs but to emphasize the foolishness of wars and to urge religious leaders to become peacemakers.

On August 5, Turkson first offered a prayer at the Atomic Bomb Memorial Mound in Hiroshima Peace Memorial Park along with a group of pilgrims from all over Japan. He then joined a two-kilometer march from the park to the Catholic Memorial Cathedral for World Peace.

On August 6 he joined Buddhist, Protestant and Shinto leaders on the anniversary of the atomic bombing of Hiroshima.

In a speech at a dinner organized by the Inter-religious Dialogue for World Peace, Turkson invited the world's religions, as well as today's secularized people, not to succumb to the “suffering” that often seems to be man's only “destiny here on Earth.”

“Confused and discouraged, we are tempted to undergo suffering as chastisement or punishment, as a cruel fate. Such senseless suffering can eventually defeat us,” he said.

The Vatican official stressed that to build real and lasting peace no segments of the population should “suffer exclusion, deprivation, injustice and violence.”

“No amount of ‘peace-building’ will be able to last – he said quoting Pope Francis – nor will harmony and happiness be attained in a society that ignores, pushes to the margins or excludes a part of itself.”

“Real peace-making is to include and to integrate even those on the peripheries,” he concluded.

Cardinal Turkson then traveled to Nagasaki where he took part at an inter-religious memorial ceremony at Ground-Zero Park before celebrating Mass on Aug 9 to commemorate the victims of the atomic bombing of that city.

The Ten Days for Peace are observed every year as a time for remembrance and as a call for world peace.

The “ten days” that are remembered begin with the bombing of Hiroshima on Aug 6, 1945, continuing through the bombing of Nagasaki three days later, and concluding with the surrender of Japan to the Allies on August 15.

The official designation of these 10 days as such was made when Pope John Paul II issued an appeal for peace in Hiroshima in 1981.