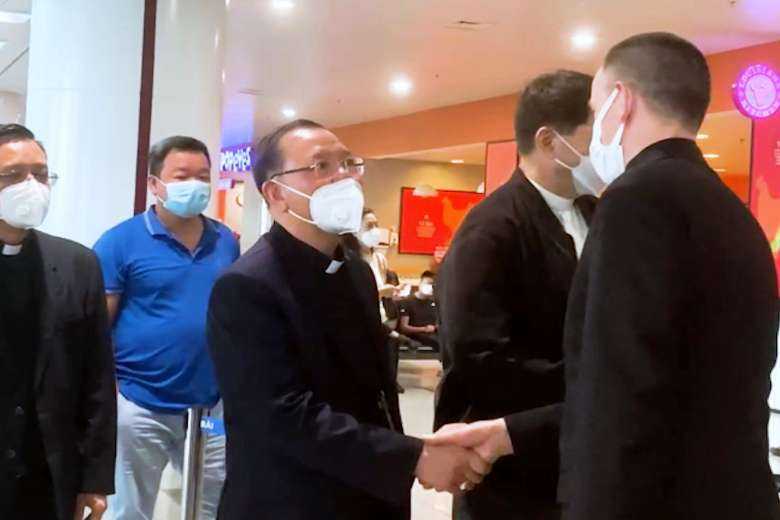 A Vatican delegation plans to accelerate a process for enhancing diplomatic ties between the Holy See and Vietnam.

On April 20, the three-member delegation, led by Monsignor Miroslaw Stanislaw Wachowski, the Vatican's undersecretary for relations with states, arrived in Hanoi to start a seven-day working visit to Vietnam. Other delegates are Vietnamese Monsignor Francis Cao Minh Dung and Korean Father Han Hyun-taek.

Father Joseph Dao Nguyen Vu, head of the Office of the Catholic Bishops' Conference of Vietnam, said the Vatican delegates will attend the ninth meeting of the Viet Nam-Holy See Joint Working Group on April 21-22 to discuss ways to set up an office of a permanent papal representative in the country.

The group started to work towards agreements to improve bilateral relationships in 2009 but no meetings have been held during the past two years due to the prolonged Covid-19 pandemic.

Father Vu said the delegation will also pay courtesy calls on Prime Minister Pham Minh Chinh, the Home Affairs Ministry, and the Government Committee for Religious Affairs, which controls all religious activities in the country.

The Jesuit priest said the Vatican visitors will celebrate a special Mass at Hanoi Cathedral on April 23.

During their visit, they also plan to meet bishops who plan to attend their biannual meeting held in the Bishop’s House of Thai Binh. They will visit religious sites and meet local Catholics.

The Vatican has had no diplomatic relations with Vietnam since the last Vatican envoy was expelled from the country in 1976 after the communists took control of South Vietnam.