The new man is seen as close to the Chinese government and cold to the pro-democracy movement, a report said 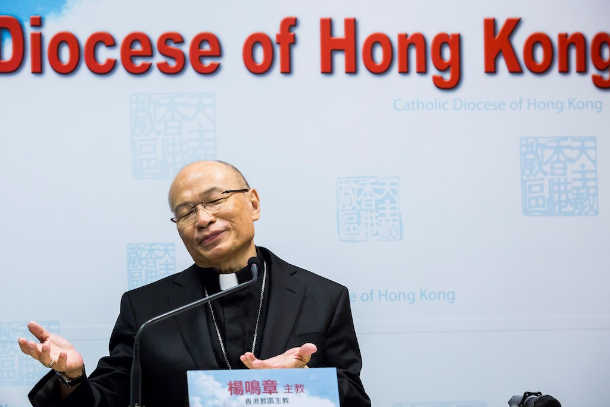 Late Bishop Michael Yeung of Hong Kong speaks to the media in Hong Kong on Aug. 2, 2017 after he was appointed head the diocese. He died in 2019, and the Vatican has finalized his successor but delayed announcing it, says a report. (Photo by Isaac Lawrence/AFP)

The Vatican has decided who the next bishop of Hong Kong will be,  but has delayed naming him over concern that local Catholics may see him as too sympathetic to the Chinese Communist government, according to a US-based news agency.

Senior Church officials in Rome, Hong Kong, and mainland China have independently confirmed that a decision to appoint Father Peter Choy Wai-man as the next bishop of Hong Kong had received final approval in Rome, Catholic News Agency (CNA) reported.

Hong Kong Diocese has been vacant since Jan. 3, 2019 following the death of Bishop Michael Yeung Ming-cheung. Cardinal John Tong Hon, Bishop Yeung’s predecessor who retired in 2017, has led the diocese since then.

Father Choy, one of Hong Kong's four vicars general, has been chosen as bishop. But the Vatican has delayed announcing his elevation because it could be perceived as a rebuke of the ongoing anti-China political protests in Hong Kong, CNA said, quoting several unnamed Vatican and Hong Kong diocesan officials.

“The situation [in China and Hong Kong] is very delicate and no one wants to make things more difficult. It will be announced [when it can be] and that’s all there is,” one senior curial source in Rome is quoted as saying.

Hong Kong has been witnessing massive street protests since May last year with mostly young people demanding China end repressive measures on the city-state. Protesters say since the former British colony was returned to China in 1997, democratic space has been increasingly depleted despite Beijing promising to rule Hong Kong under a “one country two system” policy.

The reluctance to announce the name of the new bishop stems from Father Choy’s perceived closeness to the government and his and his coldness toward the pro-democracy movement, which is supported by many lay Catholics.

The 61-year-old Father Choy was appointed a vicar general with responsibility for the bishop’s office, the ongoing formation for both clergy and laity, and leading ecumenical and interreligious dialogue for the diocese. He is also the dean of Hong Kong’s seminary.

Father Choy is said to have a good working relationship with Chinese government officials, both in Hong Kong and on the mainland. He was reported to have attended a meeting with Cardinal Tong and Carrie Lam, Hong Kong’s chief executive, during the height of the protests.

Another senior local cleric offered a more unsparing assessment of Father Choy’s reputation in Hong Kong, describing him as a “pro-Beijing hawk,” and a “sworn enemy of [Cardinal] Zen,” the most outspoken local Catholic leader.

Senior clergy fear the appointment could trigger a denunciation from Cardinal Joseph Zen Ze-kiun, Cardinal Tong’s predecessor as Bishop of Hong Kong, and an outspoken critic of the 2018 Vatican-China deal.

“His elevation is just further proof of how the Holy See is selling the faithful down the Yangtze, or in this case Pearl River,” CNA quoted the senior local cleric as saying.