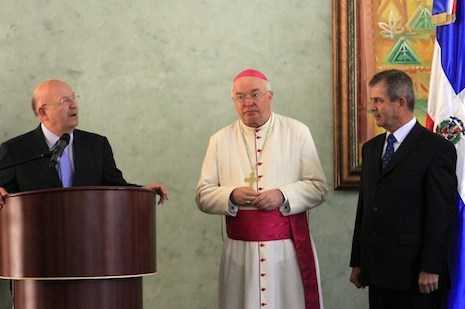 The Vatican's former ambassador to the Dominican Republic has been convicted of sex abuse by a church tribunal and defrocked pending further criminal proceedings in the first case of its kind.

Polish archbishop Jozef Wesolowski, who was recalled to Rome last year amid claims that he sexually abused a number of children in the slums of Santo Domingo, was found guilty by the Congregation for the Doctrine of the Faith, the Vatican said on Friday.

It is the first time that a Vatican ambassador has been defrocked for sexual abuse. Wesolowski, who has two months to appeal, was slapped with the severest punishment possible for a cleric and told he can no longer perform priestly duties.

Once his canonical conviction is definitive he will have to face the Vatican City's criminal tribunal, which could sentence him to prison in what would be the first such trial for sex abuse within the tiny city state.

The conviction came six months after the UN's child rights watchdog highlighted Wesolowski's case as an example of the Vatican's failure to take concrete actions to prove its commitment to stamp out the abuse of minors by priests.

The sight of the Polish cleric wandering around Rome and lunching in restaurants had sparked fury on social media sites this week.

Vatican spokesman Federico Lombardi said Wesolowski would now be stripped of his freedom of movement while the legal process took its course.

The Church has faced a decade-long series of scandals over abuse by priests and lay officials, from Ireland to the United States and Australia.

It was fiercely condemned by the United Nations in January for failing to stamp out child abuse and allowing systematic cover-ups by simply moving around clergy suspected of raping or molesting children.

Wesolowski, 65, had been ambassador to the Dominican Republic since 2008, but was recalled by Pope Francis last August following accusations of sexually abusing minors.

He was ordained in 1972 by then archbishop of Krakow, Cardinal Karol Wojtyla, who later became pope John Paul II and was elevated to sainthood this year.

The late pontiff named Wesolowski the Vatican's envoy to Bolivia. He was later posted to several Asian countries before being dispatched to the Dominican Republic by former pope Benedict XVI in 2008.

Press reports last year linked him with another Polish priest Wojciech Gil, accused of raping boys while serving on the Caribbean island.

Pope Francis has vowed to crack down on abuse in the Catholic Church, reiterating the zero-tolerance approach taken up by his predecessor.

Last year he overhauled Vatican law, issuing a special decree which declared that sexual violence and sexual acts with children, child prostitution and child pornography were punishable by up to 12 years in prison.

In May he warned there were "no privileges" for bishops when it came to child sex crimes and likened sexual abuse to a "satanic mass".

At a UN hearing earlier this year, Vatican officials revealed that 3,420 abuse cases had been handled over the past decade by the Catholic Church's Canon Law prosecutors.

As a result of these cases, 848 priests were defrocked while a further 2,572 were ordered to "live a life of prayer or penance", for example in a monastery.

The Vatican says it receives around 600 claims against abusive priests every year, many dating back to the 1960s, 1970s and 1980s. AFP