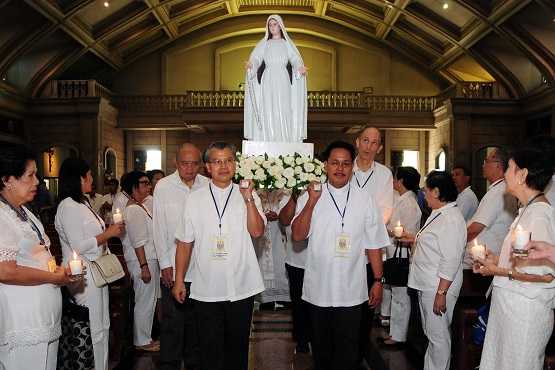 Devotees carry the statue of the Our Lady of Mediatrix of All Graces during the National Marian Pilgrimage in Manila in this 2012 file photo. (Photo by Roy Lagarde)

A decision made by the Vatican on a reported Marian apparition in the Philippines some 60 years ago has confused some Filipino Catholics.

"[The devotees] are unhappy, unsatisfied and not at peace with themselves," said retired Archbishop Oscar Cruz of Lingayen-Dagupan.

The prelate said devotees of the Our Lady of Mediatrix of All Graces have been asking of "some sort of a review."

Archbishop Cruz said the devotees are not interested "whether there was a miraculous phenomenon or not, but as to the continuation of their devotion."

In December last year, the Vatican issued a decree declaring the reported 1948 Marian apparitions at a Carmelite Monastery in Lipa, in Batangas province had no supernatural origin.

The Vatican statement overruled an earlier declaration by the local bishop that the apparitions were of "supernatural origin."

Archbishop Cruz said that after an investigation, the church's Congregation for the Doctrine of the Faith declared that there was no miracle in the phenomenon.

"The matter is closed as far as the congregation and the Holy Father are concerned," said the prelate.

Archbishop Cruz said a pronouncement made by the bishops' conference, however, further confused devotees.

The country's bishops said devotion to the Our Lady of Mediatrix of All Graces is centuries old and should be fostered as a "private devotion."

In a pastoral advisory last July, the Commission for the Doctrine of the Faith of the Philippine bishops said devotion "must not to be based on the alleged Lipa apparitions."

Other Philippine church leaders said the Vatican decision might have confused some devotees, but it did not affect the devotion of Catholics to Mary.

"No matter how painful [the Vatican decision] is [the people's] attachment to Mary becomes stronger and the prayer for the church more intense," said Archbishop Ramon Arguelles of Lipa.

Father Melvin Castro, a devotee of the Our Lady of Mediatrix of All Graces said the Vatican decision made the devotion to Mary "stronger and deeper [because] it is not dependent on any apparition at all but is actually rooted in God's divine plan of salvation."

In an earlier statement, the country's Catholic bishops said there is no need for apparitions to honor the Virgin Mary.

"Her being the mother of Jesus is our first and constant reason for honoring her," said Archbishop Socrates Villegas of Lingayen-Dagupan, president of the bishops' conference.

On Sept. 12, 1948, the Virgin Mary reportedly appeared before Carmelite postulant Teresing Castillo and reportedly told the aspiring nun that she was "Mary Mediatrix of All Grace."

The apparition was followed by several appearances of unexplainable showers of rose petals inside and outside the Carmelite convent in Lipa town.

In the 1948 apparitions, the Blessed Mother reportedly appealed for humility, penance, and prayers for priests and for the pope.