Vatican Conclave to start on March 12 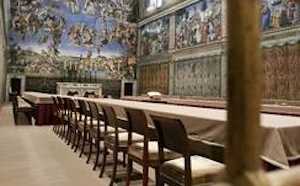 Cardinals gathered in Rome will start voting for Pope Benedict XVI's successor on March 12, the Vatican announced on Friday.

Since Monday, the 115 cardinal electors – together with dozen of cardinals over 80 who have lost the right to vote – have been meeting regularly to discuss the profile of the future pope and the challenges he will have to face as leader of the Roman Catholic Church.

The Tuesday start date for the Conclave seems to signal a compromise between the cardinals, especially those in the Roman Curia, according to Italian media reports, who wanted the election process to start as early as Sunday, and cardinals from dioceses around the world who wanted more time to get to know each other and evaluate papal candidates.

The election process will begin on Tuesday morning with a solemn mass in St. Peter's Basilica, known as “Pro Eligendo Romano Pontifice,” or “For the election of the Roman Pontiff.”

On Tuesday afternoon, cardinals will file in procession into the Sistine Chapel, where they will hear a spiritual reflection by retired cardinal Prosper Grech of Malta.

Following the Mass and after all non-cardinals have exited the room, the voting process will start under Michelangelo's Last Judgment fresco.

On each day of the Conclave, cardinals will hold two votes in morning and two in the afternoon, until a candidate reaches a two-thirds majority, or 77 votes.

After months of information leaks that have led, among other measures, to the arrest of Benedict's former personal butler, Paolo Gabriele, the Vatican is employing high tech measure to ensure the secrecy of the process.

Jamming devices have been installed around the Sistine Chapel and around the Santa Marta residence, where cardinals will live secluded from the world during the days of the Conclave.

This is to prevent electronic eavesdropping as well as to jam any communication between cardinals and the outside world.

Even the most tech-savvy of cardinals, many of whom have been tweeting regularly during pre-Conclave events, will be forced to accept a media blackout during the vote.

According to Vatican spokesman Father Federico Lombardi, Vatican police will make sure that even the cardinals' transfer from Santa Marta to the Sistine Chapel – a few hundred meters walk or drive within the Vatican – is protected from “unauthorized encounters.”

During the cardinals' pre-Conclave meetings, known as General Congregations, over 100 cardinals have taken the floor to address issues as diverse as new evangelization, the relationship between the Curia and local bishops, interfaith dialogue and bioethics.

But while formal speeches in front of the other cardinals are useful to outline the profile of the future pope and the challenges he will have to face, Lombardi stressed that informal gatherings during coffee breaks or meals play a key role in allowing the cardinals to get to know each other and evaluate candidates' characteristics and suitability for the Church's top job.